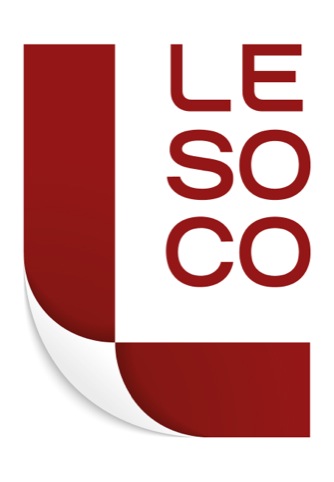 The consultancy was brought in to create the name and visual identity for the new institute, which was created with the aim of increasing interest in Southwark’s offer while promoting Lewisham’s reputation for vocational training.

The identity will be used across the college’s campuses in the boroughs of Southwark and Lewisham.

Elmwood chose the LeSoCo name as it blends the words Lewisham and Southwark, and was influenced by other amalgamated place names like New York’s Soho – a shortening of ‘South of Houston Street’.

The visual identity depicts a folded page corner, which Elmwood says suggests ‘the building sense of anticipation that’s felt when you can’t wait to turn the page to your next assignment, your next module or the next chapter of your life’.

The graphic device surrounding the name uses an ‘L’ shape with the corner turned up, ‘revealing an exciting new future’, says Elmwood. The red and white colour palette was inspired by London iconography such as buses, post boxes and London Underground signage.

Elmwood says, ‘At the heart of the LeSoCo vision is the strong belief that the two colleges united as one are greater than the sum of their parts, setting them apart from other London colleges through their mission to instill students with an enterprising spirit and equipping them with the skills they need for the future’.

Simone Davies, LeSoCo director of marketing and communications adds, ‘The new branding reflects our aspirations for the future, it has signaled the beginning of the new: joining two organisations, post merger, in to one to create something new and exciting’.

Home Street Home – a campaign for street children from The Partners