Well, at least at St Pancras International Station, it will be.

Yesterday saw the unveiling of the Cloud: Meteoros sculpture, designed by sculptor Lucy Orta and her husband Jorge, which is suspended above the station’s Grand Terrace.

The sizeable piece, which measures 15m wide, 3m high and 3m deep, replaces the Olympic Rings, and joins the station’s other art installations including The Lovers and Martin Jennings’s statue of poet John Betjeman.

According to Lucy and Jorge Orta, the piece was inspired by the history and grandeur of the station.

Lucy Orta says, ‘I  hope our sculpture, suspended in the midst of this incredible architecture, will be one more way for the millions of visitors to admire the beauty of the space and to take their minds off the mundane.

‘Just in the way ceiling frescoes affected Renaissance dwellers many centuries ago, our hope is that this sculpture will similarly inspire Londoners, making them look up and ultimately feel differently about their surroundings’.

The piece is the first commission in the Terrace Wires series of works to be hung in the space, and was chosen by a panel of judges including Wallpaper Magazine editor Richard Cook, ceramic artist and author Edmund de Waal and Rector at University of the Arts London Nigel Carrington. 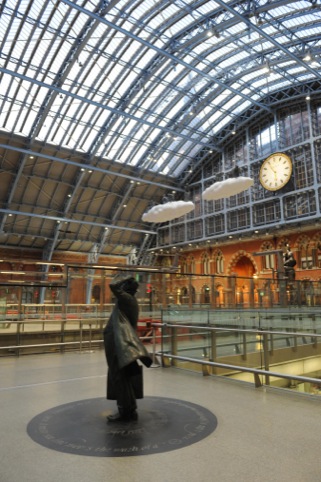 The second piece of art will be installed in spring 2014, when the judging panel will reassemble to judge the 2015 piece.

Cloud : Meteoros is on display  at the Grand Terrace at St Pancras International Station, Euston Rd,  London N1C until autumn this year

Design could lose its individual classification in Government plans

This is what goes inside a jumbo jet