‘Naming ourselves was the longest part of starting up. Consciously avoiding wacky, abstract or founders’ surnames, we wanted something to reflect our collective aspirations: finding the gem of an idea in every brand. All options were rejected until the bank manager called and said our chequebook was about to be printed – if we didn’t choose a name he’d do it for us! With that incentive in mind we brainstormed again and Mike [Branson] mentioned the female pearlfishers of Japan as a metaphor for skill, daring and dedication in bringing great value to the surface. Karen [Welman] and I shouted yes! We called the bank manager who said, “Inspired choice! Bizet’s Pearlfishers is my favourite opera!” We didn’t care, a new brand of design company was born and we’ve never looked back. After 22 years of similar client assignments I’m convinced there is no science to naming – its an art.’

‘For brilliant businesses in the creative industries, we are really awful when it comes to naming our companies. Ad agencies are the worst. AMVBBDO/TBWA/O&M/BBH/JWT/CHI/BMB… We wanted to avoid this trap when we started our design consultancy. About 15 years ago David Law and I were contemplating life as working designers. We were pondering our next career moves. I asked David, then gainfully employed at CPB, “Who do you want to work for?” — he replied “I don’t really want to work for anyone anymore, I want to work for NoOne” — a month later we started a company called NoOne together. NoOne was wholly owned by — (according to Campaign Magazine) — the “Ad Agency of the Decade” — a rather poorly named but brilliantly operating HHCL&P. I happened to be a partner there and somehow managed to convince the board to allow David and I to start a design company at the ad agency. Things went well. And after five years we had learned how to do more than just design and had met the brilliant Laura Hussey. So we three left and went indie. Thing was,the new management at the agency wouldn’t let us take the name (although we took everything else!) We needed a new one. From NoOne to SomeOne was an easy step to make. The clients we had at NoOne were amused to stop writing cheques to NoOne and start writing them to a more positively named design consultancy. Since then we’ve found it advantageous to have a sticky name. Many a project email can be found with a confused middle conversation between departments client-side. “We need a design company to do this. Get someone to do it. I will, but who? Someone. Stop mucking about I need a hand. I mean SomeOne. Get them to do it. etc etc.” — it’s not easily forgotten. Truthfully naming is pretty trivial. If it was critical to a brand’s success then Carphone Warehouse should never have worked. Although Carphone Dixons may be taking it a step too far…’ 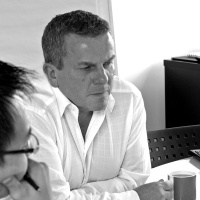 ‘When Roger Partington and I set up BrandPie we wanted a name that was simple, distinctive and memorable – something which was different and  a bit quirky but which reflected what we are: creative strategists. We wanted a name that made sense but also made people smile. We focused on what we believe is at the core of strong brands and successful businesses – a clearly defined Purpose, a distinctive Identity and audiences that are strongly Engaged – or, in shorthand, PIE. It made BrandPie an easy choice. Even better the .com was available.’

‘When we started out, “Household” encompassed the essence of what we wanted to create; places for people where they would actively want to spend their time. As we have grown the name has grown with us. Today, as we build all-channel worlds for brands and create experiences to enhance people’s daily lives, the name has more meaning than ever. “Household” symbolises a friendly place of collaboration, where relationships grow through shared ideas and experiences.’

Ady: How about North?

Martin: True? As in our aim is…