Being a Sussex lass myself, I was pretty excited when we first heard about Wayne Hemingway’s plans to start a retro-inspired festival about ten minutes from my hometown of Chichester. 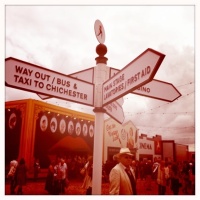 Vintage at Goodwood, which was held in the South Downs this weekend, allowed visitors to screech through the decades, dancing at a 1970s soul club one minute, taking tea in a 1940s gin palace, then ending up at a 1980s warehouse rave complete with lasers and an Audi Quattro.


Even the most sceptical of punters could not be unimpressed by the thought and manpower that had gone into the interiors, allowing visitors to travel through time and spend the afternoon in a bygone era. Particularly effective was both of Tanqueray’s sponsored venues the cocktail bar on the festival’s High Street and the Torch Club, which hosted 1940 crooners and jazz kittens.


Aside from the impressive interiors, it was the expected details that made the festival. The John Lewis high street store held craft classes where vintage-clad girls and the occasional guy, knitted, purled and stitched the afternoon away. The Bad Art Salon provided some terrible pieces of art and some hidden gems.

Film-lovers were rewarded not only with the high street cinema but with a restored 22-seat vintage mobile cinema. Fellow DW reporter Tom Banks narrowly kept his fingers after motorcycles roared around the Wall of Death, which had been constructed in the 1920s.


Although Vintage at Goodwood will not detract from the host of other UK music and art festivals, Hemingway has clearly found a niche market and has targeted it well. There was a great atmosphere among the young hipsters and vintage veterans alike. Let’s hope that it was successful to warrant another year.

The industry has always thrived on friendships – long may that continue

All of Us creates website for Earls Court redevelopment plan