Silent Cinema is teaming up with The Deptford Project to create an outdoor cinema in south east London this September. 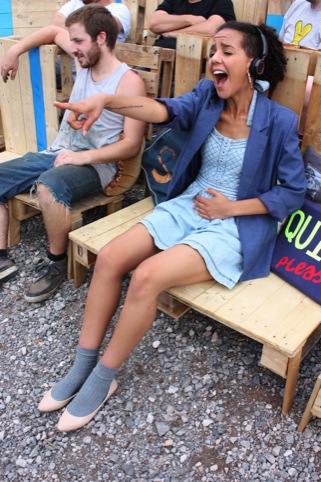 Design groups Jail Make and Boro inhabit The Deptford Project’s railway arch spaces and have created a screen and cinema seats from wooden palettes. To protect your bottom from the slats, fellow arch-dwellers Crafty Bitches have made cute, movie-themed cushions.

Silent Cinema is named such because its punters don headphones to block out aural irritatants like rustling wrappers, giggling girlies and coughing Colins. Perhaps you welcome an opportunity to tune out life’s oafish and uncouth, or maybe hearing other people laugh, cry and gasp in horror along with you enhances your cinematic experience. Whatever your feeling, all will agree that popping to The Deptford Project’s railway carriage café or the loo without missing a moment of the movie’s soundtrack is a good thing.

Classic movies including An American Werewolf in London, Withnail & I and Ferris Bueller’s Day Off will play at The Deptford Project between September 9 and September 25. At least it won’t annoy the neighbours.