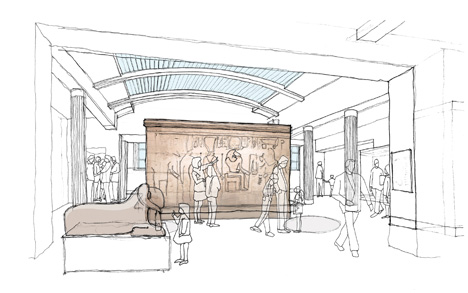 The new Galleries of Ancient Egypt and Nubia (modern-day Sudan) will open on 26 November and feature the Ashmolean’s Egyptian collections and objects that have been in storage for decades.

Architectural and interior design is being led by Rick Mather Architects and the practice is working with the Ashmolean’s design department on exhibition design, with the in-house team also developing interpretation design. DHA Design is working on lighting design for the galleries.

The museum says the new galleries will more than double the number of mummies and coffins on display. Ashmolean director Dr Christopher Brown says, ‘Rick Mather’s design for the galleries now allows us to display material that, for reasons of conservation, has not been seen for up to half a century.’

The £5 million project covers the redesign and redisplay of four existing Egyptian galleries and the extension into the restored Ruskin Gallery, which was previously occupied by the museum shop. It will feature new lighting, display cases and interpretation.

The galleries have been designed to ‘take visitors on a chronological journey covering more than 5000 years of human occupation of the Nile Valley’, according to the Ashmolean.

The collections will be presented under the themes of Egypt at its Origins, Dynasitic Egypt and Nubia, Life After Death in Ancient Egypt, The Amarna ‘Revolution’, Egypt in the Age of Empire and Egypt Meets Greece and Rome.

The Ashmolean says the galleries opening will complete its Ancient World Floor, which also features galleries on Prehistoric Europe, Classical Greece and Rome and Early India, China and Japan.