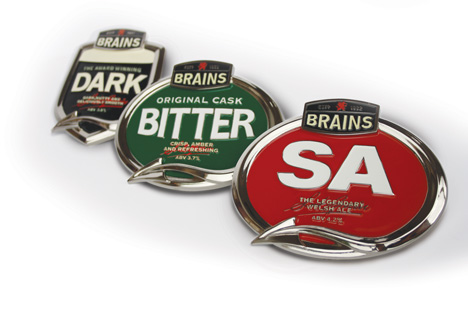 The consultancy was appointed in December 2010 following a five-way strategic pitch.

The project involved rebranding the Brains cask ales portfolio, including redesigns for Brains’ Bitter, SA, SA Gold and Dark. Blue Marlin was briefed to evolve the brands in order to appeal to new consumers and reach a wider demographic.

The new designs will be initially seen on pump taps, before rolling out across other touch points including labels and can livery.

Chris Hart, Blue Marlin Bath creative director, says, ‘We looked at Brains’ heritage and what Welshness means today.  The Welsh dragon is really important so we wanted to find a modern, contemporary way of representing it that is stylish, adaptable and ownable.’

Brains sales and marketing director, Richard Davies, says,  ‘Our previous cask design had been in market since 2002 so, with more interest and competition in the category, we felt the time was right to modernise.’

The new designs will be launched today at the Great British Beer Festival in Earls Court, London.