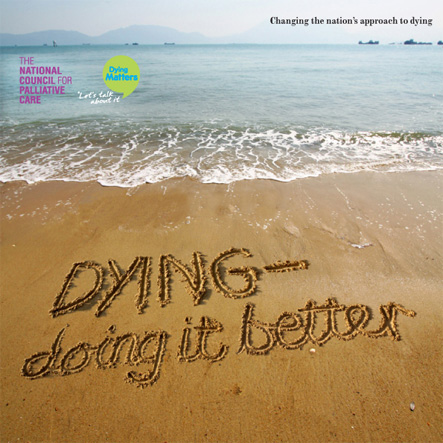 The report aims to promote the work of the NCPC and Dying Matters – organisations that work to change attitudes towards death, dying and bereavement.

Fit, which has worked for both the NCPC and Dying Matters previously, was appointed to the project in June following a three-way pitch.

The consultancy was tasked with creating a report to describe the NCPC and Dying Matters’s work and achievements which would be sent to both high-level opinion-formers, such as the Department of Health, as well as members of both organisation.

Kara Penn, director at Fit Creative, says the report had to be ‘accessible but not too dumbed down’.

The consultancy came up with the title Dying – Doing it Better as well as the subheading Changing the Nation’s Approach to Dying. Penn says, ‘The tone is optimistic but straight-talking. We tried to avoid cliches such as images of hand-holding.’

She adds, ‘The client is open to designs that are straight-talking and they also like a bit of wit.’

The report is due to be sent out in the next week.