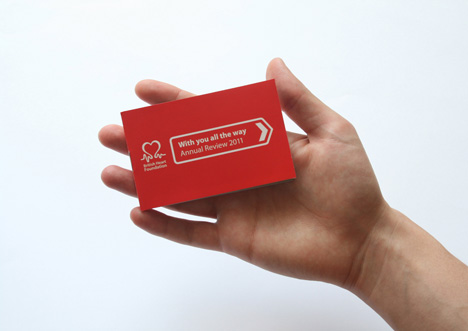 The wallet, which measures 10cm by 6cm, comes in four different designs. NB Studio also created seven versions of an eight-page ‘wraparound’ leaflet that folds round the main booklet to allow supporters to easily see the BHF’s work in their area.

Louise Kyme, design manager at the British Heart Foundation, says, ‘Our supporters told us they wanted something shorter than the A5 booklet we produced last year, so when NB Studio suggested using a travel card holder it posed a fantastic challenge for us to boil down our achievements to their absolute essence.’

The review’s title, With You All the Way, reflects the journeys theme, supported by NB Studio’s road sign graphics, text by copywriter Nick Asbury, and photography by Roy Mehta.

Nick Finney, designer and director at NB Studio, says, ‘We were given the challenge to make it smaller, so we made it as small as possible. We tied it in with the idea of a journey round Britain.’

He adds, ‘The size and use of the wallet create a real sense of ‘grabability’ because they look great and create intrigue as they’re not what you’d expect from an annual review.’

The consultancy has worked with the charity as part of its design roster for about two years. The roster also includes Hat-Trick Design, B&W Studio, Marc & Anna, Sennep and Magpie Studio.

NB Studio also designed an interactive Googlemaps site to accompany the review, which allows supporters to submit their own BHF-related stories to add to the map. The site was built by Unified Solutions and the BHF.