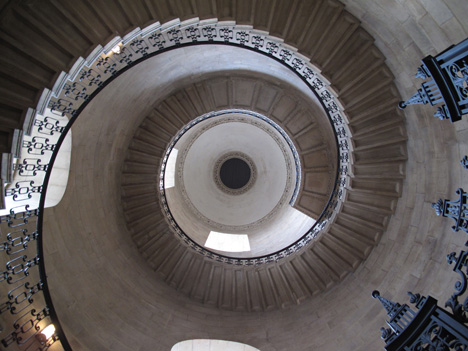 To mark the 300th anniversary of the opening of St Paul’s Cathedral, the LDF has asked Pawson to design a piece which will reference architect Christopher Wren’s vision that his building’s should serve a scientific purpose.

Pawson’s piece Perspectives is being designed with crystal brand  Swarovski and uses the Geometric Staircases of the Cathedral’s South West Tower.

A concave Swarovski crystal meniscus, (lens) will sit at the bottom of the stairwell on top of a larger reflective surface. Above this, a 2m wide spherical convex mirror will be suspended in the tower’s cupola, together creating a composite image of the view up through the tower and simultaneously an elevated downward perspective.

The installation will be fee to access from 19- 23 September.

David Chipperfield Arhitects’ Two Lines is the festival’s Size and Matter commisson – an annual piece which pairs a designer with a material or process.

This year the architect will team up with engineers and glass specialists from Arup and use a metal-coated fabric mesh which it will layer between two pieces of glass.

Translucent and reflective properties will be explored through ‘a sculptural dialogue between two identical forms’ according to LDF.

The installation will be on display from 17 September – 16 October  at the Royal Festival Hall, London SE1.