This year’s event, the sixth in its history, will take place in Old Spitalfields market, and has seen designers creating specially customised ramps.

For the 2010 event in Hamburg, Death Skateboards created a pirate ship obstacle, while this year’s is inspired by London’s most famous skating hotspots.

The 2011 obstacle for Death was designed by Luke O’Grady, who has been skating for over ten years. His passion fed into his work, and he now creates graphics and animations for various skate companies.

Death Skateboards’ Dan Cates approached him for this project, which will see him taking London skating stomping-grounds and remaining them as Victorian, tying in with the event’s location – famous as the sire of the Jack the Ripper murders.

O’Grady says, ‘I met up with [Cates] and we came up with the concept together. It had to be about Victorian London, with things like Jack the Ripper.

‘We decided to replicate the old famous London skate spots, like the Southbank, and turned it into the Ten Bells Pub [in Spitalfields – heavily patronised by the Ripper’s victims].’ 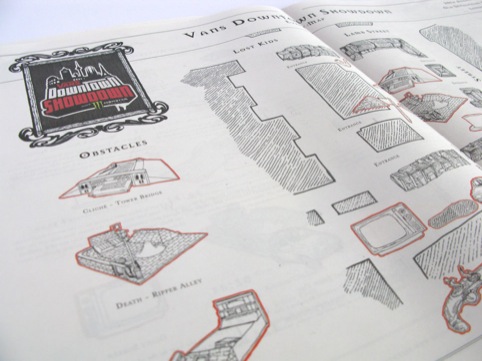 Cure Studios has designed the Daily Waffle, the event’s official newspaper, which was printed by the Newspaper Club with illustration by French.

James Hurst, Cure Studio director, says, ‘They’d [the client] created a mood board for the event – it’s the first in the UK and there was a heavy focus on Jack the Ripper related stuff, lots of Victoriana.

‘The brand guidelines they sent to us went into detail about only using Helvetica, but after seeing French’s illustration we pulled it apart and went hell for leather using interesting typefaces. We also designed the mast head with the bridge which set the tone for Victorian pastiche – but I don’t think in Victorian times we’d have looked anywhere near as playful.’

Murder? Dickensian ailments and squalor? The workhouse? No, probably not as playful.