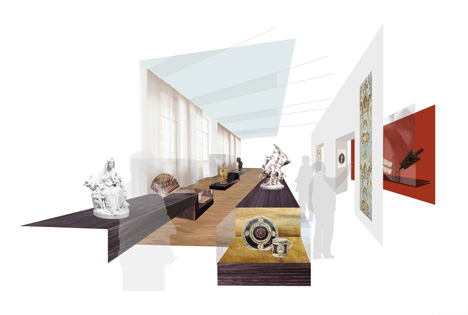 The work – hailed as a ‘flagship’ Futureplan project – will see the complete redisplay and reinterpretation of seven galleries, which will open in 2014 and complete the restoration of the entire front-wing of the museum.

The museum says the work, which will take place in existing gallery space at basement level along Cromwell Road and Exhibition Road, will see the 1970s cladding stripped back to reveal the orginal Aston Webb architecture and reclaim more than 350m2 of unused display space.

Hidden windows will be reinstated to maximise natural light and teak parquet floors will be restored.

Moira Gemmill, the V&A’s director of projects, design and estate, says, ‘We chose ZMMA for this project because of their inspired response to our brief. As well as covering all the practival considerations of displaying sensitive and precious objects in appropriate conditions, their concept emphasises the luxuriousness of the collection and theatricality of the period.’

The galleries have received a first-round pass from the Heritage Lottery Fund of £4 757 600, including £401 600 development funding.

The first phase of the V&A’s Futureplan programme ran from 2001-2009 and comprised 43 projects, including the opening of new Medieval & Renaissance Galleries. The second phase of Futureplan is now underway.