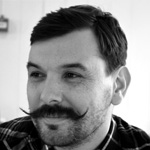 I’d ask Jamie Elliott and Liam Healy, two really interesting designer makers who set up a studio called Jail a year ago and make lovely, considered things. I’d ask them to blow glass. They seem to have an innate understanding of the materials they use, from giant metal structures to tiny electronics. I think they’d do amazing stuff with blown glass and I think they’d love it. 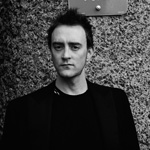 I would love to see Syd Mead design paired up with 3D printing, and set to work on designing the next Boris bike. Sod the embarrassment of trying to free the bloody thing from the jaws of death, print your own at home and carve out a Dalston [East London] sized ego down at the local asymmetrical hairdressers. 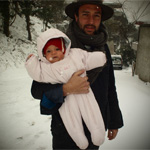 I’m from Scotland so I miss the winter in this current London heat. I  also think that there is not enoug promoted intrepidity in city life in general. So I’d like to flick James Dyson into reverse and ask him to make an environment that is as harsh as possible for people to  experience. So with current London weather as the material, I’m imagining big Dyson turbines churning out wind, rain and snow. I’m sure that this idea would appeal to his megalomaniacal side too. 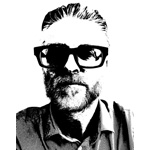 People enjoy the South Bank and promenading beside the Thames, but for me it’s frustrating as you have little interaction with the river. The illegal beach parties organised when the tide is out let people get down to the waters edge and enjoy the foreshore. Based on this I would have the South Bank swamped with massive sand dunes from the Wheel to the Design Museum. The designers would be kids and invariably their dads with buckets and spades. Sponsored by Travis Perkins.