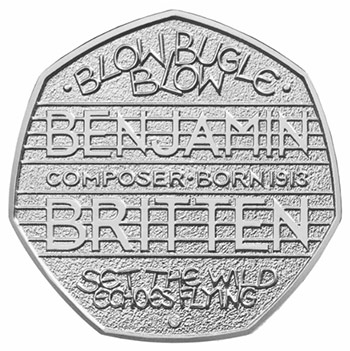 When the 50p piece goes into circulation on 22 November, it will be the first time a composer has featured on a British coin and Britten will become the first person other than the Queen to have their full name featured on a 50p coin.

The coin has been designed by artist and composer Tom Phillips and features Britten’s name set in a double-stave.

The design also features two quotes from Tennyson – ‘blow bugle blow’ and ‘set the wild echoes flying’ – which were set to music by Britten in the Serenade for Tenor, Horn and Strings.

Phillips says, ‘What I wanted the coin to speak of was music. Thus the stave soon entered the design… and his name married well with the stave. ‘

He adds, ‘The natural accompaniment with Britten’s passion for poetry as our preeminent composer of opera and song, was some kind of key quotation.

‘The words which eventually suggested themselves come from the Serenade for Tenor, Horn and Strings. What better clarion call for a musical anniversary could there be than “Blow, bugle, blow: set the wild echoes flying”?’

Richard Jarman, director of the Britten-Pears Foundation, says, ‘Benjamin Britten wanted his music to be “useful” and to be played and heard by as many people as possible. He would therefore be thrilled that this new 50p coin will put him into everyone’s hands and pockets.’

How to be proactive with clients