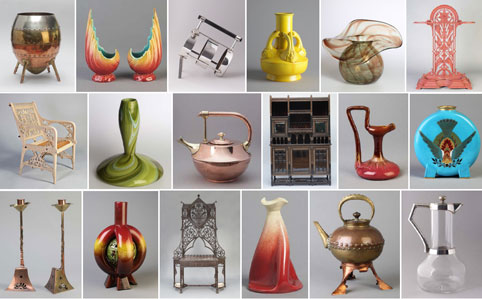 Born in Glasgow in 1834 he studied at the Government School of Design in London, specialising in botanical studies, before starting his own studio around 1860.

His career was built on designing for an expanding professional class consumer market and he achieved critical success in 1899 when Studio magazine described him as, ‘Perhaps the greatest of commercial designers, imposing his fantasy and invention upon the ordinary output of British Industry’.

From the 1870s Christopher Dresser also became a brand as his products carried his name, which was associated with good taste.

It was after his death in 1904 that he became worryingly anonymous and eventually almost forgotten.

Historian Nikolaus Pevsner wrote about Dresser in 1937 and his work was included in the Victorian and Edwardian Decorative Arts exhibition at the V&A in 1952. The V&A did return to Dresser in 2004 for Christopher Dresser: A Design Revolution, but that’s about it.

This is also the second time that The Fine Art Society has recognised Dresser, who was the subject of one of its exhibitions in 1972.

Now thankfully he is considered by many as the father of modern design and the new exhibition is a chance to see why.

It takes in Dresser’s metalwork, furniture, glass, cast iron, chromolithographic books and ceramics, some of which were designed for manufacturers including Wedgwood, Minton and Coalbrookdale.

His botanical training can be seen in early ornamental work and the show highlights the enormous influence of non-Western cultures on Dresser, and his Victorian customers who were inspired by what they had seen at exhibitions and museums of the time.

In 1876 Dresser represented the British Government and the South Kensington Museum (now the V&A) on a trip to Japan, and returned profoundly affected by what he had seen, creating much more minimal and streamlined designs.

The exhibition takes in the huge breadth of his work and includes everything from ‘high Victorian pomp’ to ‘arrestingly Modernist designs’ according to The Fine Art Society.