The campaign called ‘Choose Charity Shops’ launches in 7000 stores – 80 per cent of the UK’s charity shops – in May. It is run by the Charity Retail Association, an organisation that represents 330 UK charity brands including Barnado’s and Oxfam.

The association hopes the campaign will encourage people to donate directly to charity shops rather than to commercial competitors.

Leeds-based consultancy B&W was recommended to the assocation by the British Heart Foundation. It pitched against one other consultancy and started working on the project early this year. 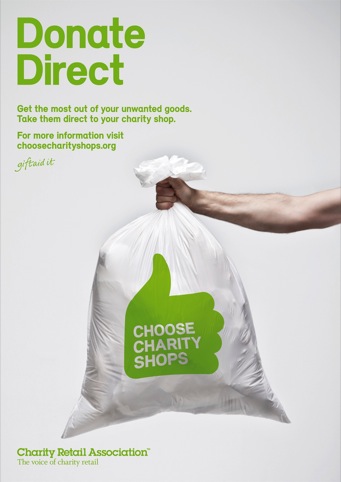 Featuring a simple ‘thumbs up’ graphic, B&W’s design will be used on store windows, posters, point of sale stands and direct mail.

Each individual charity shop can change the colours to fit its brand identity and show their support.

‘We had to tread very carefully in terms of message; we’re forewarning people about other charities and where to spend their money, it’s difficult subject,’ he says.