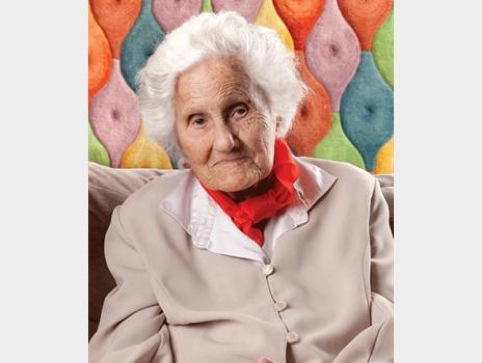 Born in 1906, her training as an industrial designer began as an apprentice to the last medieval guild potter in Hungary.

Drawn by the ‘intellectual and social movements’ she first visited Russia in 1932 and soon took a job visiting ceramics factories.

In a 2010 Design Week interview she said, ‘I remember racing over the snow at night in a horse-drawn sleigh with wolves howling all around.’

Zeisel, who was made artistic director of the porcelain and glass industries of Russia in 1935, was falsely imprisoned for 16 months after being accused of participating in a plot to kill Stalin.

She was released, moved to Austria, married, but soon had to flee Nazi-occupied Vienna so headed to America in 1938.

That year, through an American design magazine, Zeisel found a manufacturer who commissioned her to make a children’s tea set.

Soon she was designing chinaware for the Museum of Modern Art in New York – the focus of a MOMA exhibit in 1946.

The British Museum holds examples of her Town and Country dinnerware collection, designed in 1945-46 and produced from 1947.

When Design Week last interviewed Zeisel, she was still pitching for work at the age of 103 and had just won a commission with The Rug Company in London.

Her inspiration – which can be seen in the Town and Country collection – was often taken from natural forms, ‘particularly the human body,’ she said.

Zeisel received an honorary doctorate from both the Royal College of Art in 1988, and was made a Royal Designer for Industry in 2004.

Monsters and Marmite – an interview with Pete Fowler