Red or Dead’s new website, which launched earlier this month, was designed by digital consultancy ORM, based on the interiors concept. Each area of the store and the site is designed to look like a room, which houses the corresponding fashion products. 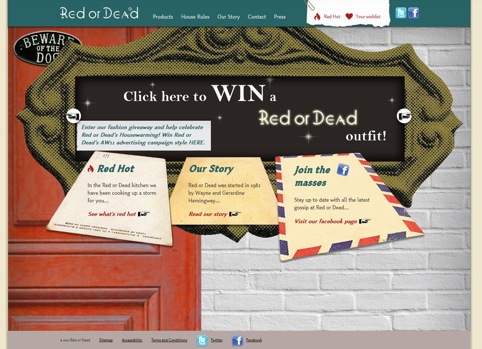 For instance, a bathroom is displayed on the site for swimwear products and a garden is shown as the backdrop when shopping for bikes.

Though Red or Dead has been undertaking research into the feasibility of opening its first standalone store in London, the brand’s marketing assistant Fabiola Clemente says that it is hoped the brand will initially open a store or a concession in China before continuing with plans to open in the UK.

She says, ‘We had a store concept finalised at the beginning of 2011 by Design 4 Retail but we’re currently researching it and intending to expand internationally first – with footwear in America and the whole brand in China. We wanted to consolidate the brand.’

The concept features a red brick fascia and ‘very British house-esque building’ with panelled windows. Customers would pay in the kitchen sink, with the staircase of the drawing room used to display footwear. Mannequins with picture frames for heads will be used to displays the clothes.

The ‘bathroom’ area for swimwear will use copper piping, which runs through the entire concept, on which clothes can be hung.

Clemente says, ‘We want our stores and concessions to be based on this and the brand book can be used to showcase the brand internationally. If it goes well internationally next year then we’ll look to having a new store here but at the moment it’s not looking like it’s a solid plan.’