The consultancy was appointed to the project in spring last year, having been approached by Discovery to pitch against one other consultancy.

The channel will show a mixture of existing Discovery Network shows, brought together for the Spanish market.

The project involved creating a new logo, identity system and style guidelines for the new channel. Form’s work was completed in December last year, and was then taken in-house by the network.

Paula Benson, Form co-founder, says, ‘All the programmes contain something slightly out of the ordinary, or extreme, or action, or that’s passionate – it’s all about exhilaration.’

The brand identity aims to create a ‘sense of energy and dynamism’, according to Form. Benson says, ‘It had to fit with the family of the Discovery Network and incorporate elements from the overall network identity, so we didn’t want it to look too crazy. It has a sense of gravitas.’

The identity uses photographic imagery sourced from the programmes themselves, including pictures of personalities such as Bear Grylls. 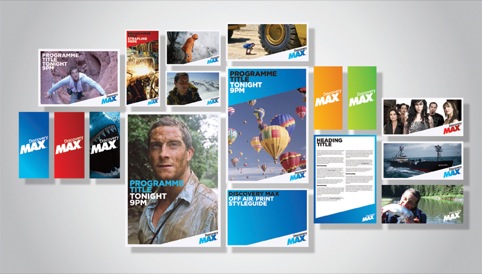 The logo incorporates the Discovery corporate typeface to identify it with the parent brand, while the ‘Max’ uses a customised version of Futura extra bold. It is angled upward, form left to right, and this identifier is shown across all imagery and graphic panels within the identity system.

The consultancy used a colour gradient from light to dark, with the lead vivid blue colour used because of its connotations with the globe, sea and nature. The secondary palette of red, yellow and green was used to link with the existing on-air identity developed by Discovery’s creative team in London.

All headings use black and white capitals, with the brand guidelines created by Form stating that details such as MAX are always typeset in capitals.

The style guide details  how the identity system is used across all touch points including print and outdoor advertising, event banners, presentation templates, stationary and merchandise