Cue Songs launched in beta phase yesterday at music conference Midem, in the South of France, and is being sold as an online platform offering licensed music and recordings for commercial purposes from signed and independent artists.

Girardot was approached by Averdieck in May 2011 and appointed on credentials according to creative director Paul Girardot. 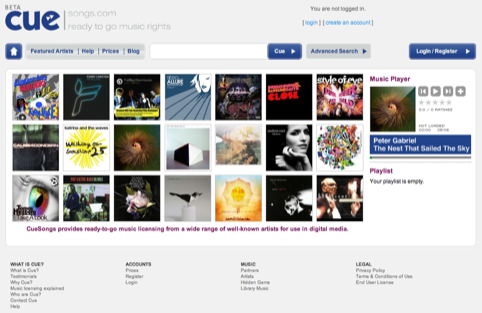 A naming exercise led to several names being presented and Cue being selected.

This was partly for its music connotations says Girardot, but also because company co-founder Ed Averdieck is the identical twin brother of James Averdieck, founder of confectionary company Gü.

The playful reference has led to an identity ‘which is not completely different to the Gü identity,’ says Girardot.

Girardot has developed an interface ‘which will instantly get across the variation of artists on the home page’.