Among the works are, bizarrely, a project by Charlie’s Angels star Lucy Liu. The pieces in her Falling Into Silence series, which appear to be string sewn onto a sack-like canvas, are somewhat unremarkable – though according to the gallery, they are ‘an exploration of sexuality, identity, race and memory’.

We’re particularly excited about Tenderpixel’s contribution – the Sketching Robot.Created by Patrick Tresset, the interactive robotic sculpture – or ‘cybernetic face-sketcher’/ ‘obsessive drawing entity’ – which will be on hand to sketch willing visitors’ faces. 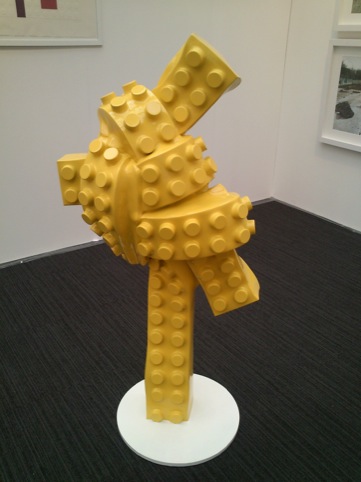 Amongst the more sinister works is a Little Red Riding Hood sculpture, replete with scarlet KKK cloak; while much of the fair seems to have an avian theme. We especially love print studio and gallery Jealous’ stand, which features Ralph Steadman’s bird illustrations, and the Rob Ryan works at Tag Fine Arts, which also boasts the playful, bold Lego-like sculpture from Chris Mitton.

Other highlights include the Cabinet of Curiosities by photographer Bill Jackson at  Troika; Francisca Prieto’s unbound and intricately re-folded maps; and the Sims Reed Gallery, which won our hearts with Hockney’s adorable dachshunds and some brilliant Paolozzi pieces.

This year’s annual contemporary photography showcase, Photo50, is focusing on works by artists who ‘adorn, transform, subvert or deface the photographic print’, according to curator Sue Steward.

The series, entitled The New Alchemists: Contemporary Photographers Transcending The Print, sees artists including David Birkin, Aliki Braine, Julie Cockburn and Melinda Gibson using a mixture of digital manipulation, craft and mixed media to take the idea of the photograph into a whole new format.