The consultancy was initially approached by the company following the receipt of a Design Week award. It was invited to present its portfolio and credentials, and was appointed in April this year. 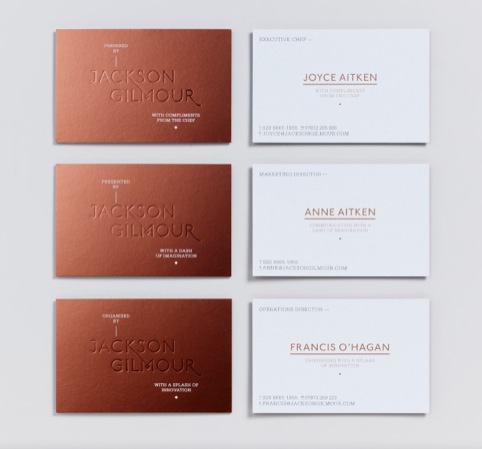 The identity will be used across the website, stationary, marketing collateral, crockery, bags, product tags, staff uniforms and vans.

Ben Christie, Magpie Studio creative director, says, ‘They’ve been going for about ten years and it’s been a real success, so they wanted an identity that reflects them a bit better. They’re very high-end and quality, but that wasn’t coming across in their brand.’

The designs aim to reflect Jackson Gilmour’s recipes, which are all created by the company’s owner and head chef Joyce O’Hagan. They use a mainly copper and white colour palette, with a logo formed of the company name’s ‘J’ and ‘G’ intertwined.

The typography is inspired by copper pot hallmarks and the diagrammatic language of family trees to emphasise the family run element.

Christie says, ‘Because of the type of clients they deal with it’s deliberately restrained to sit well with the high-end market.’

The branding will officially launch later this month at an event at the Fleming Gallery in Mayfair.