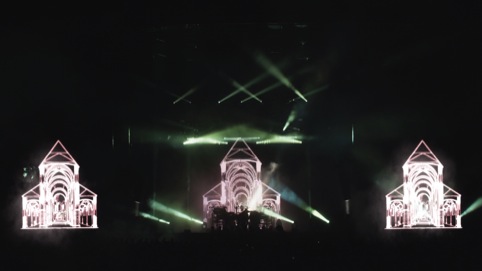 Design Week: how important is the visual aspect to gigs for acts like Chemical Brothers?

Marcus Lyall:  For the Chemical Brothers, the live show is a total marriage of music and visuals. The lyrics are often spoken by characters in the visuals. And Tom and Ed include samples that sync to key images.

Adam Smith: It is something that has always been an integral part of the shows right from the first gig 18 years ago when the set was 20 minutes long and the images were shown on Kodak slide projectors and loops on 16mm projectors.

DW: where do you choose the imagery from?

ML: Adam and I make all the content ourselves. Some of it comes from small-scale experiments, some from big shoots. We try to avoid things that rely solely on technology for their appeal. It’s all about characters and performance.
We get a lot of inspiration from early twentieth century experimental film-makers and animators. There’s not much CGI involved, it’s mostly a lot simpler than it looks.

AS: The ideas for the imagery starts from the music. The set list is the script. And the set list takes you on a journey of a variety of emotions so we try and reflect that journey visually. 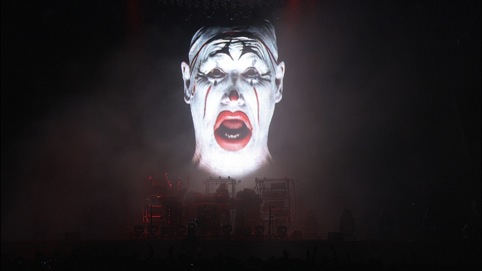 DW: how would you describe the key aspects of the visual elements of the show?

ML: The show is a mixture of film and lighting. The visuals are shown on two different LED screens.
One is a very low-res LED cylindrical sculpture, the other is a huge, semi-transparent screen at the back.
There’s also a huge lighting rig, most of it behind the back screen, so the lighting feels like it’s radiating from images that are hanging in mid-air.
We did a lot of work to make the lighting and visuals sync completely, using animations and films to trigger the lighting. There’s also a lot of strobe lights and lasers…. 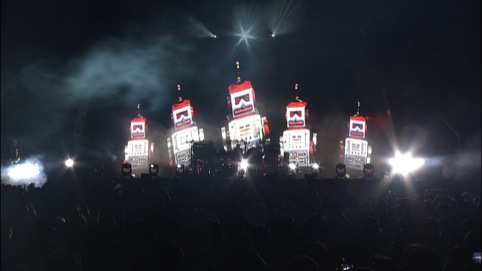 DW: how do you use each live environment to influence the visuals?

ML: Tom and Ed have a different sound depending on the audience they are playing to. So that affects how the show gets played. A smaller indoor show might have a darker, more minimal sound, so there will be more blackouts and a harder edge.
A festival show needs to reach out to a much bigger crowd, so things are bigger and brighter.

AS: And sometimes the show has to be adapted when playing festivals to utilise rigs that are there. Frustratingly sometimes the screen would not fit on some of the stages so had to be made smaller…

DW: what other acts would you pinpoint as using particularly striking visuals to accompany their shows?

ML: Visuals are becoming fairly ubiquitous in live performances. Lots of people are pushing things forward, both in terms of imagery and production design.
I really enjoyed Es Devlin’s Pet Shop Boys show design, for its cube theme, taken to ridiculous levels.
Besides the usual suspects, like Bjork, Nine Inch Nails, Lady Gaga and the like, who really believe in the power of strong imagery, we’ve been really inspired by people like Punchdrunk Theatre, who are doing amazing things with the structure of theatre performances. 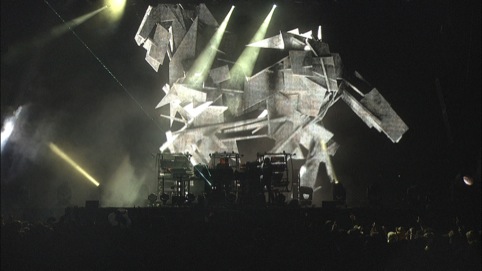 DW: how has new technology shaped the visual aspect of live music?

ML: New lighting and LED screen technology means that you can have a show where the lighting doesn’t blow out the imagery, and vice versa.
This means the visuals can be far more detailed and effective. Being able to previsualise and program the lighting and video before you get to rehearsals means that you can have a much more intricate show. The sheer expense of rehearsals, with full kit and crew means you never get long enough to do it all in the flesh. 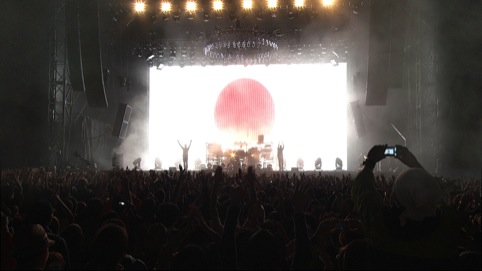 DW: where do you see live visuals going in  future?

ML: There’s a lot of potential for creating really synaesthetic performances as music and film-making gear becomes more accessible. In the future I’m looking forward to shows where music and visuals are being thought about and composed at the same time, so the visuals aren’t just illustrating the music, or the music scoring the images. All the technology is there. It’s just people getting used to working that way. I think the biggest area for development is being able to make live, generative visuals that don’t have that OpenGL computer games look.
The technology thing is interesting to a point, but the real aim is making people engage emotionally.

AS: I like the idea of the live experience becoming a more immersive one so its not just a band on stage with visuals behind but that the visuals can appear everywhere – even to the point where they are coming to life and appearing in the audience. Merging a gig/installation/theatrical experience would be great. 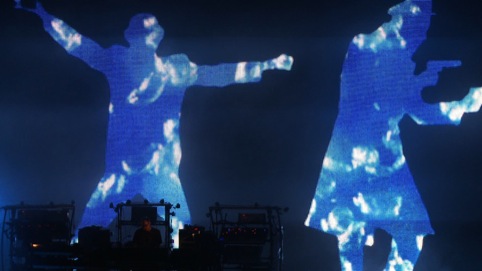