Creed will be the first in a series of artists to design the venue’s Gallery restaurant, each of whom will take over the space for about 18 months, according to Victoria Brooks, who curates the art elements of Sketch.

Brooks says, ‘Martin Creed seemed very interesting as he’s very playful with his take on public realm art. He immediately had some ideas – it was really a conversation rather than a brief. The limitations are that it’s a restaurant, so it has to be a functional space.’

The project will see Creed working with various designers, who are contributing the pieces for the space, as well as Andres Ros, designer at consultancy Maison Baton, which Sketch works with on its interiors.

It is hoped the space will be at once an exhibition, a restaurant, an events space and an artwork in its own right.

One of Creed’s artworks, Work No. 1347, will be a zigzag formation snaking the floor, created from 96 different types of marble and accompanying a series of paintings.  Work No. 1343  is a new work, which is really a sort of umbrella term for the restaurant itself, in which no two objects will be the same. Every glass, chair, table and piece of cutlery is entirely different from the next, with those to feature coming from designers including Ligne Roset, Versace, OMK, Carl Hansen, Ron Arad, Martino Gamper, Carpenters Workshop, Hille and Modus.

There is also the possibility that Creed will create a sculpture for the ceiling made of sound-proofing materials, though this is still a ‘work in progress’, according to Brooks. 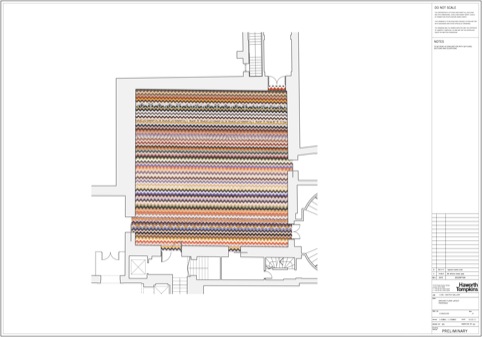 Creed will even have a say in the menu, as Sketch co-founder and chef Pierre Gagnaire will draw his inspiration partly from the artworks.

We’re yet to hear what form the lighting will take.

Martin Creed at Sketch will open on 1 March 2012 at9 Conduit Street, London,