This year sees the debut of Tom Dixon’s MOST, a partnership between Dixon and Ambra Medda and Martina Mondadori at Museo Nazionale della Scienza e della Tecnologia. The space will house exhibitions, lectures and seminars.

His Luminosity show of lamps, lights and shades will see the launch his new Etch Web Light and Fin Light. As well as a hosting other exhibitors, Dixon will take over four spaces at MOST, including the Spring Table pop-up restaurant from Dock Kitchen’s Stevie Parle.

Also at MOST is London based artist and architect Constance Schweda’s ∞ curl’ table series. The uni-material  (hence the ∞, or infinity) designs are inspired by Kiri-gami, a Japanese paper art that sees paper cut and folded into a three-dimensional shape. The pieces are created from a single continuous sheet of steel, with each sculpted as a one-off piece formed by metal artisan Sam Neal.

Another MOST piece that caught our eye is the amazing series of Cutebot sculptures – larger-than-life lounging wooden robots that double up as comfy adjustable seating, created from a collaboration between America designer David Weeks, Belgian design group Quinze & Milan and New York group Areaware.

The ever-outlandish Lee Broom’s exhibition takes the form of a good old-fashioned British pub – the Lee Broom Public House. Here, he will be launching a new limited-edition ‘serving ritual’ for Scotch whisky, Ballantine’s 12 Year Old. This comprises a new decanter that can be deconstructed into three sections for different uses – the base acts as the whisky glass, the middle section can contain ice cubes and the top section can hold water or mixers.

In the Brera Design district, London-based designer Andy Martin will be showing the Undergraduate shelving range, inspired by the student accommodation-style shelving formed of stacked bricks and wood. Elsewhere, artist and designer Matthew Broussard will be showing new furniture designs at the Mint Market concept store in Milan’s Via Casati.

Among the many product launches is the O’Sun, a rechargeable solar lamp designed by Alain Gilles for Nomad. The cute lamp has been designed for use by both developing countries – where it can be used as a solar powered alternative to dangerous kerosene lamps – and in the developed world, where it can be easily recharged using mains power or in-car cigarette lighters.

Alongside the main areas, the city will be hosting a number of other design-related events, performances and shows. Design Dance will be shown at the Teatro dell’Arte, a project by Michela Marelli and Francesca Molteni that will see design objects become actors and storytellers, narrating the story of their creation.

Designer Nelly Ben Hayoun has worked with Foley artist Sue Harding on a very exciting-sounding project entitled No More Heroes. The piece forms part of the 100 years of Rebellious Imagination – Hacked exhibition, curated by Beatrice Galilée at La Rinascente. The project will see Ben Hayoun and Harding recording Milan Design Week’s background noise and manufacture processes, playing them back in a performance – aiming to echo John Cage with his ‘let’s put a performance on design’ advice.

Students from Geneva University of Art and Design have collaborated on a show called Inverse Everything at Istituto Svizzero di Roma – Sede di Milano. Apparently, this will allow visitors to ‘discover new experiences that break the classical laws of Newtonian physics’, in a laboratory-style environment.

Meanwhile students from the Royal College of Art will be showing Paradise – an exhibition situated in the Ventura Lambrate district with works from students of art and design disciplines including Animation, Architecture, Ceramics and Glass, Design Interactions, Design Products, and Innovation Design Engineering. The students have taken inspiration from their own interpretation of paradise and the idea of a better future. 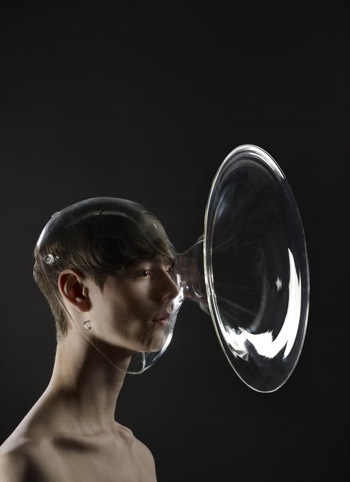 After all this brilliant design, it’s more than likely you’ll need a drink. Thankfully, Heineken and their carefully selected group if 19 designers are on hand. This time last year, we reported on Heineken’s search for designers to create a pop-up club for Milan . Now, with the help of 19 designers, the project has come to fruition – resulting in a pop-up bar with a flexible, origami-influenced structure; an interactive bar; and light-reactive  responsive surfaces and spaces. The club is situated at Via Privata Gaspare Bugatti 3, Zona Tortona.