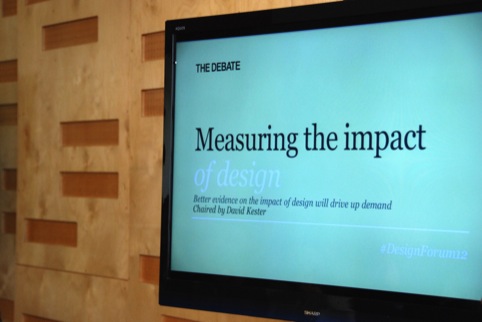 The forum culminated in a for-and-against debate on the motion ‘Better evidence of the impact of design will drive up demand.’

Design Museum director Deyan Sudjic and architect Michál Cohen, arguing against, faced a losing battle – as a poll taken before the debate showed that 86% of the crowd agreed with the statement, with just 14% against.

Pryce, a former head of the Government’s Economic Service and a long-time servant at the Department for Business, Innovation and Skills, understands the value of speaking Government’s language.

She points out that Government’s power over the design industry is huge. It can support design education, provide tax breaks and support public projects. And crucially, ‘Government will favour proposals which indicate a payoff to the economy’. Particularly in an economic downturn.

Meanwhile Sands, who points out he ‘works at the coalface, trying to get clients to spend money on design’, was predictably passionate about measuring the impact of design. He does, after all, have to sell it.

Sands says, ‘I spent two days going through two year’s worth of pitches that we had won or lost. I looked at the reasons we had been unsuccessful. For example, if the client had said we were too expensive then we obviously hadn’t adequately communicated the value of what we do.

‘I came up with seven principles of selling design [note: he was understandably unforthcoming on what these are…]. In the last two years I’ve been involved in 20 pitches. We haven’t lost a single one.’

Both Sujic and Cohen (arguing against) put forward the argument that that design’s impact is inherently difficult to measure, with Sudjic also pointing out that ‘lots of companies already know perfectly well that they have to invest in design,’ adding, ‘Government has been saying design is good for you since 1851 [year of the Great Exhibition].’

So, measuring design – beneficial but difficult. But is there more to it? Well yes, first of all why should we measure it at all? As Helen Hamlyn Centre director Jeremy Myerson says, we need to frame the issue. He (jokingly) pointed out that while the Design Business Association is helping consultancies help people sell crisps and beer, designers are working on healing environements to cure people who have had too many crisps and too much beer. What kind of ‘effectiveness’ should we be aiming for?

And should evidence of design’s effectiveness simply be used to drum up demand for it, or should it be used to improve the discipline itself? As Design Council chief design officer Mat Hunter says, ‘Are we selling the value of good design or also identifying the cost of bad design?’

It’s interesting that the motion put forward by the Design Council was ‘better evidence of the impact of design will drive up demand’, rather than, say, ‘design should be subject to evidence-based measurement’. The first is easy to respond to. The second, less so.

There are obviously huge benefits to measuring the impact of design – in selling it to clients and in persuading Government to open its purse-strings. But if we reduce the impact of design purely to statistical analysis, and this is what clients and funders come to expect from it, then isn’t there a danger that we’ll lose the intangible benefits that design can bring?

The beauty of design – when this beauty occurs – isn’t in ticking a series of measurable boxes for a client, but in delivering something completely unexpected, that works perfectly. To use the old cliché, solving a problem that nobody realised existed. As Sudjic pointed out, ‘Design is important because it is so hard to pin down.’

At the end of the debate the opening motion was again voted on – ‘Would better evidence on the impact of design drive up demand? This time 75% agreed, and 25% disagreed.

In the interests of disclosure, Design Week voted in favour of the motion, albeit rather reluctantly. How would you have voted?

Voxpop – What can designers bring to organisations?