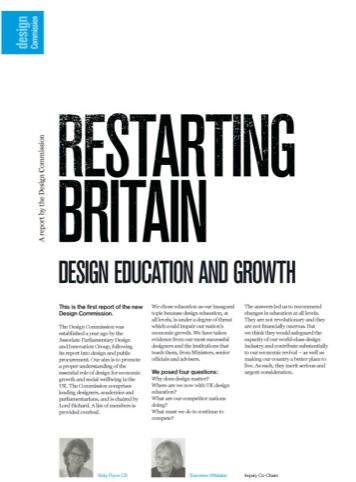 The report, which launched on Monday night, has made four recommendations: that Government needs a National Design Strategy; that Government should oppose any move to remove design from the National Curriculum, but also think again about how design operates in schools; that further education routes into the sector need to be expanded and developed and that higher-education centres of excellence need protecting and developing.

The report was led by Baroness Whitaker and economist Vicky Price, who trailed the results last Wednesday on BBC Radio 4’s Today Programme.

Speaking on the programme, Price both highlighted the perilous position that design education currently finds itself in and made a call for a national innovation policy that recognises design.

She said, ‘I think there’s a real danger, particularly with the education policy now, that both art and design and design and technology will be dropped from the curriculum and we’re not going to end up with the types of designers who have made a huge difference to economic growth.’

She added, ‘We’ve taken quite a lot of evidence from business and there is no doubt that design is such an important part of any product that is produced – engineering cannot result in the sort of things we have seen developed in the past without proper design.’

Price’s calls for a national innovation strategy that recognises design appeared to have been addressed the very next day, with the release of a Government Innovation Strategy that appeared to mention the word design on practically every one of its 104 pages and backed this up with solid policy detail such as a doubling of the size of the Designing Demand scheme, which looks to help SMEs make better use of design.

Indeed, a large part of the Design Commission’s executive summary is a laudable call for Government to both recognise and understand the value of design as a term of reference. Citing the example of the newly launched Technology and Innovation Centres, the report notes, ‘Government is talking about the design process without acknowledging it. The ommission of design reveals the fact that it is not understood as it should be.

‘”Design” is not simply a matter of aesthetic appeal, it is essential to science and engineering, it is the discipline that links new ideas and new technological advances with new products, new services and new processes.’

So while it can presumably welcome to an extent the acknowledgement of design in the National Innovation Strategy, the Commission still recommends further measures, including a ‘comprehensive’ National Design Strategy ‘beyond delegating tasks to the Design Council’ and the appointment of someone inside Government to lead on it, drawing in experts and design practitioners to help. 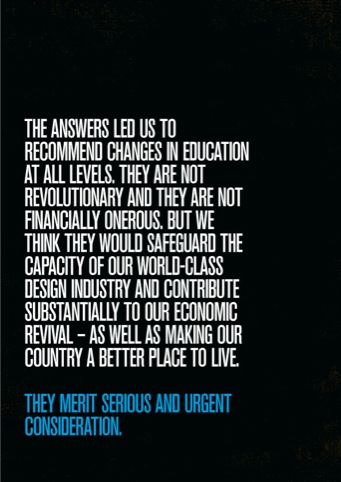 Moving to the more specific issue of education, the Design Commission is joining the calls of protest about the perilous situation that D&T finds itself on the National Curriculum. With the Curriculum currently under review, and with D&T already ditched from the English Baccalaureate, there is a strong feeling that D&T could be overlooked with the education policy review reports back next year.

The Design Commission report says, ‘Undermining [creative education] will, in ten years time, or perhaps less, thwart any other investments in the nation’s innovative capacity and seriously hamper our competiveness.’

However, the commission has gone beyond simply calling for design education to be preserved, and is proposing a more interdisciplinery approach, where design could be used to break down barriers between subjects. It says, ‘Schools should use the naturally interdisciplinery nature of design projects to break down silos between subjects.’ One for Education Secretary Michael Gove to chew over.

In addition, the report also seeks to address the problem of further education routes to design. Currently, a degree course is seen as the primary, if not the only, route into the design industry, leading to situation where, for example, more than a third of art and design course graduates have failed to find full-time work three years after leaving their courses.

The commission is calling for more attention to be paid to vocational courses, as well as the currently under-used apprentice system. Interestingly, the lack of vocational training on design courses was an issue that was raised by contributors to a recent Design Week voxpop on the subject of graduate unemployment.

And taking its interdisciplinery mission into higher education, the commission is also calling for further cross-collaboration at university level and the establishment of centres of excellence, with Government funding design on a par with science and engineering subjects (the much-hailed STEM).

The report states, ‘Our primary conclusion is that Government needs to recognise design, and in turn design education, as a positive lever for growth and act on that understanding.’

While an optimistic reading of the last week’s innovation strategy suggests that Government is starting to wake up to the meaning of design – the position of design education will not be clear until the National Curriculum is reformed next year. Let’s hope this report, and others, will put pressure on Government to give it the value it deserves.

Editorial – A new chapter opens for the Design Museum