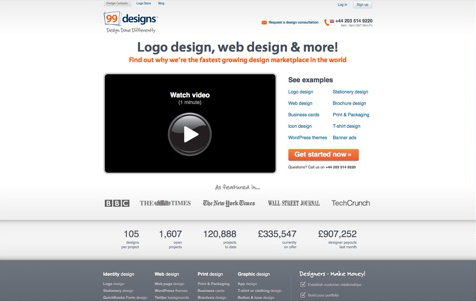 To be fair to 99Designs, they’re quick to acknowledge this controversy, with the press blurb stating ‘Do crowdsourcing sites help SMEs and start-ups by keeping costs low or do they undervalue industries? 99Designs would argue that its site generates leads and creates new markets.’

Now the site, which was founded in Melbourne in 2008 and set up a San Francisco headquarters in 2010, is launching a UK presence, with a co.uk web address and a physical presence in London. It boasts British clients such as London café Le Petit Village and charity KiDs of Bolton, founded by Bolton Wanderers footballer Kevin Davies.

The site operates by allowing clients to launch open design competitions. If you’re, say, in need of a logo, you can log on to 99designs.co.uk and start a ‘contest’. Input a few simple details (company name, sector, preferred colours etc.), post your brief and, hey presto, you’ll soon have hundreds of hungry young designers from around the world submitting their propals, of which you get to choose one. All for as little as £195.

So really, the flaws of 99Designs from the point of view of a professional designer are obvious. Notwithstanding the fact that the process asks you to submit creative work for free, it also then demands that you work to a very restrictive, and rather arbitary, brief, with little client interaction. No opportunity here to build a brand or get to the heart of a client’s values.

And what of 99Designs’ argument that the site helps SMEs and start-ups save costs? Well, there have always been and (sadly) always will be clients out there willing to pay peanuts for bad design.

Aiming  to explore the design process of a budget logo design site (although not in this case a crowdsourcing site) the pair posed as ‘Dolphin Plumbers’ and commissioning a logo. You can see the results here.

They made two very pertinent conclusions. The first was that the logo they got (after a fairly quick and seamless process) wasn’t very good. The second conclusion was that you get what you pay for. The pair say, ‘People or companies who aren’t particularly interested in the way they present themselves can’t be blamed for spending as little money as possible on a service they don’t see value in.’

Is it a problem that there are clients like this? Well, yes it is if their perception of the design industry (as a churn-it-out quick, free-pitching entity) becomes the norm. The best defence against this, as Tom and Phil point out, is to produce ‘well-considered, fairly-priced design that includes the client in the process’ to differentiate professional consultancies from ‘the lowest price gets the job consultancies’.

This is true of course, and on one level professional designers have nothing to fear from 99Designs and its ilk. But there is another issue here worth examining – what is it that attracts designers to post their services on sites like 99 Designs?

Middlesbrough-based digital designer Mike Kirby has had two spells using the 99Designs. The first, he says, was a few years ago when he was still running a studio, although after entering 10-15 competitions he then decided it wasn’t for him.

He was drawn back to the site just over a year ago when he set up as a freelancer and needed to start bringing in income to support his enterprise.

He says, ‘Where I am has been hit particularly hard by the recession, with a lot of company closures and scale-backs, which has led to a greatly reduced expenditure on new media design. This was coupled with the closure of Business Link and One North East, whose funding and grant schemes helped support the industry up here and were responsible for generating a great deal of local clients.

‘Having been outside of the design community for a while and with these circumstances, finding new clients or gaining new work from old clients proved trickier than it may otherwise have been. This led me to try 99Designs again.’

Kirby has so far entered 82 competitions, winning 28. He says, ‘I actually don’t find that conversion rate to be bad at all, especially when I think of how much time I used to spend writing proposals or going to networking events to find clients or get projects.’

He adds, ‘The potential quick payment was also appealing, given that a culture of late-to-extremely-late payment seems to have emerged here in the UK.’

Kirby says he has had follow-on work from about half of the competitions he has entered. ‘The real money of course is not earned within 99 Designs’, he says, ‘The real money is in the follow on work, which can be charged at more normal rates.’

As well as this, 99Designs appeal to younger designers looking to build their portfolio while making a little money is obvious (because setting up a Tumblr won’t get you any cash). UK-based Jonathan Frost (who has entered 100 competitions, winning 14) says on his profile, ‘With no real qualifications or previous clients, I had no way of gaining any income through design work previously’, while Keegan Ranandy, from Indonesia, says, ‘My primary motivation was to learn and I never through that I would actually win a contest.’

Asking Mat Dolphin’s Tom and Phil if they think there are any benefits to young designers using 99Designs to, for example, build their portfolio, the pair respond, ‘It’s a difficult one to answer and hard to respond with an outright no.

‘There are plenty of ethical reasons that make us encourage young designers to seek other ways to build up their portfolio, but starting out is incredibly tough and a live brief from a real client with a (small) chance of paid work at the end could be viewed as a good opportunity, as long as you know what you’re getting into.’

The pair add, ‘If you think “working” for these kind of sites is a good opportunity then its not up to us to try to stop you, but in our experience, no half-decent design studio would ever expect their employees to work for free.’

So again – is 99Designs really a problem? If both client and designer enter this Faustian pact knowing what they’re going to get out of it – the client a cheap and potentially iffy logo and the designer, possibly, a few hundred quid, then what’s the harm?

Well the harm is that both client and designer begin to regard this process as how the design industry ‘works’. If designers start to see 99Designs and other sites as a legitimate way of breaking into the industry – and starting a client relationship by offering them free work – then this is an issue that needs addressing.

Voxpop – What is your favourite example of optical illusion in design?

Voxpop – What is your favourite example of optical illusion in design?