But probably the best thing we got was two books from the lovely people at No Brow illustration and graphic art publishers – Luke Pearson’s new graphic novel, Hilda and the Midnight Giant; and Richard Short’s Klaus.

Pearson’s book tells the story of a young girl, the titular Hilda, whose idyllic countryside lifestyle is threatened by some rather menacing tiny elvin creatures who have held a very longstanding grudge against her and her family. As their threats get increasingly frightening, we’re transported to a world of avalanching rabbits, a handless (and, surprise surprise, corrupt) Prime Minister and ‘nitttens’ – like nits, but tiny hair-inhabiting cats. 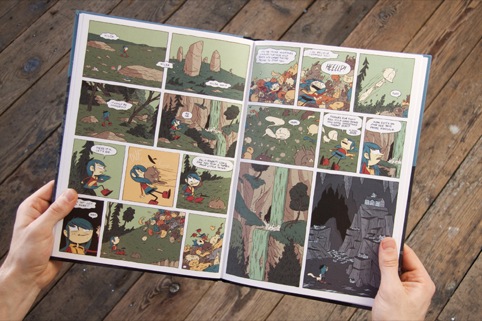 What Hilda discovers, however, is that it’s not just little people that populate her surreal environs – but huge ones too.

In a poignant example of true love waiting, it transpires that an enormous giant – as big as a mountain – has been waiting for his female counterpart, who has been asleep for four thousand years. Happily, at the end, the skip off hand in hand into the sunset.

Despite this romantic resolution, things don’t turn out so well for young Hilda…..But we won’t spoil it for you.

In a very different tale, Short’s Klaus the anthropomorphic cat, a witty little Moomin-like devil, stars amongst a cast of peculiar creatures including ‘humanoid rats’ and his feline ‘libertarian doppelganger Otto.’

In a departure from usual comic language, the dialogue is packed with literary allusions, anachronistic speech inflections and poetic quips, making for a brilliantly funny, surreal read.

Klaus by Richard Short is priced at £15, while Luke Pearson’s Hilda and the Midnight Giant is £11.95, both published by No Brow and available from http://www.nobrow.net/

We are the Robots