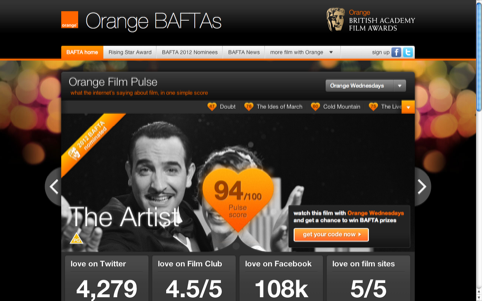 The consultancy began working on the project in September last year. Poke created the 2011 BAFTA Flick-O-Meter website, and was appointed to the Orange Film Pulse project due to its ongoing work with BAFTA sponsors Orange.

The site shows user comments on films, aggregates scores from newspaper reviews and league tables on film ratings and guides visitors to other Orange film promotions.

Will Cheyney, design director at Poke, says, ‘We strived to keep Orange consistent an on-brand – black and obviously orange are key ingredients. It had to be a super-easy and intuitive tool that felt like an application – and that doesn’t necessarily fit with the requirements technically.

‘It had to be smooth and intuitive for the user. You don’t want the interface to get in the way of the content – content is key.’

Following the end of the BAFTA season after the awards event on February 12, the site will move from the BAFTA domain to the Orange Film domain, and will continue to run as a film review aggregate site.

Poke also designed a smaller widget version of the site that can be embedded onto he sites of BAFTA partners and bloggers, which the consultancy hopes will launch next week.

Voxpop – What is your favourite design from the last 12 months?