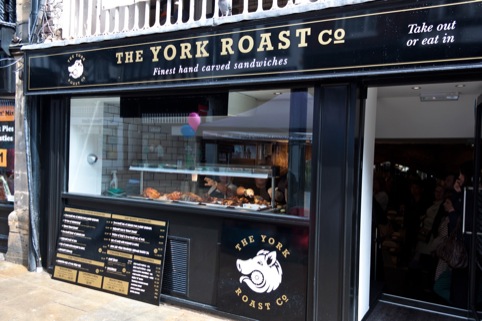 The restaurant, formerly known as York Hogroast, has been renamed by Robot Food, which has worked on a new Chester branch, The York Roast Co’s first seated restaurant.   There are two other sites in York.

Consultancy creative director Simon Forster met the company owners last year when a brief was extended from a rebrand to a new store format which Forster hopes the company can roll out nationally. 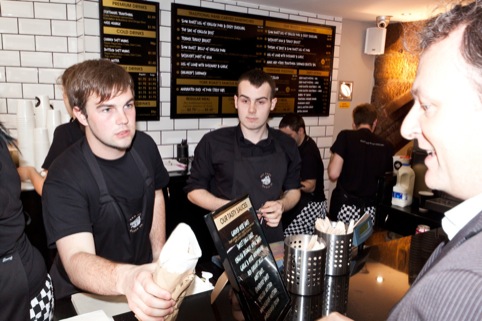 The identity mark was commissioned out to Jono Wood – from the Robot Food Artist Network, which is formed of selected collaborators.

The new look brings together ‘a butcher-shop feel with the fast-paced appeal of a New York deli’ says Forster. The consultancy has brought in  a black granite takeaway counter, fronted in reclaimed scaffold boards,  backdropped by white brick tiling with black grout.

Scaffold boards are also used in the seating area as table tops on top of steel frames which sit below red pendant lamps.

The colour palette comprises ‘heritage black’ gold and white to create what Robot Food says is ‘an old York feel in a contemporary setting.’ 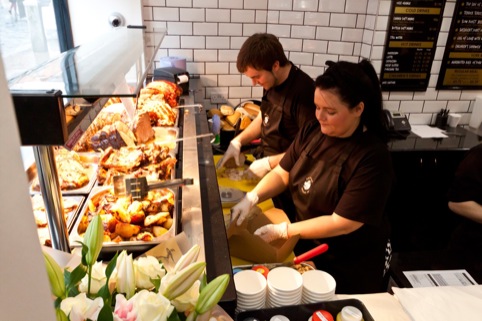 As well as designing the new branding, which has been applied across the interior, the consultancy also managed the build, and designed point-of-sale, uniforms and packaging.

Robot Food worked with the company to develop the menu, which now includes ‘Beastly’ sandwiches and ground coffee.