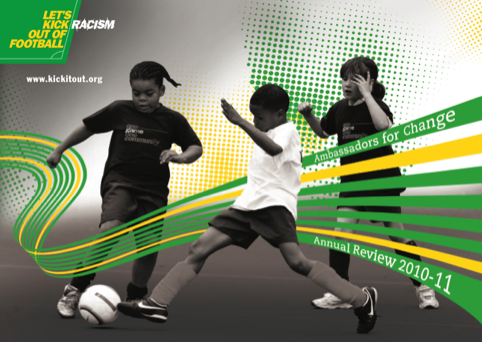 The consultancy created the charity’s campaign materials for the charity’s One Game, One Community Action Week last October, and also designed its 2010 Annual Report. It was appointed to the 2011 project in December without a pitch, and will also be designing the charity’s other printed materials throughout this year.

Ellie Thompson, graphic designer at Sherry, says, ‘The charity works to promote equality and inclusion across football so it has a really wide audience – players, administrators, the education sector and community leaders – so it’s our task to make sure we push the brand identity as far as we can.’ 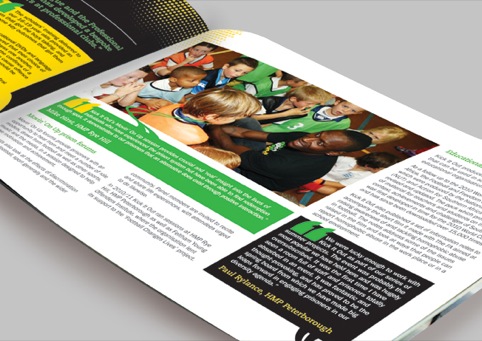 Sherry’s design uses fluid lines that run throughout the report as a metaphor for the ‘fast-paced, ever-changing’ nature of the organisation.

Thompson says, ‘We wanted it to look dynamic, confident and bold, so we used that metaphor to wrap it around the pictures, enveloping them all in the work Kick It Out is doing. It’s a narrative that leads the eyes through the pages.’

The report uses photographic imagery and the charity colours of black, green and yellow in boxes for key quotes.

Thompson says, ‘It’s about challenging the look and feel and taking colours and the brand identity synonymous with them and seeing where we can take it.’

Danny Lynch, Kick It Out media and communications officer, says, ‘Compiling our annual report can be a daunting task. With the support and guidance of Sherry we’re able to produce a document which doesn’t scrimp on information and which appeals to all of our many target audiences, ranging from players to administrators, educationalists and community leaders.’