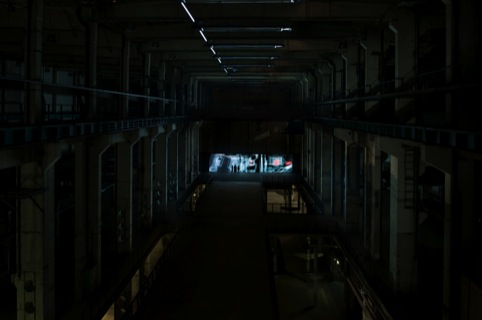 Slippery evasion of easy categorisation is par for the course with an artist like Ideka. He describes himself as a composer, working primarily in sound and has released 12 albums, yet to describe him as a musician, or even a sound artist, would be somewhat misleading.

In a constant bid to challenge his audience, two of Ikeda’s albums were packaged with a warning that they might break your stereo. According to David Metcalfe, chief executive of Forma, the arts production company that helped realise the piece, the records used waveforms that simply can’t be played on certain CD players, underscoring the artist’s aim to simultaneously test human perceptions and electronic capabilities.

Ikeda’s work is characterised by brutal use of light and visuals, using data as his primary medium – be it from the Human Genome and NASA data – or in this latest piece, the raw CAD drawings that form the new Honda Civic car, his first work produced from the data within a single object. 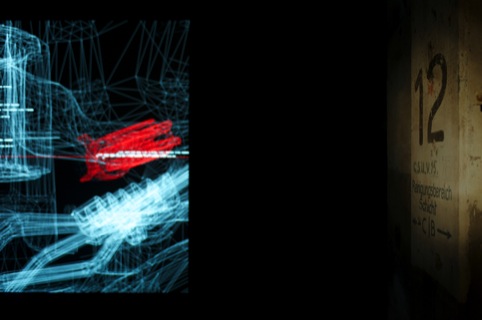 The artist created the piece in collaboration with Mitsuru Kariya, the project leader for the latest Honda Civic model, who handed Ikeda the entire CAD data for the car. Alongside five other producers, Ideka then spent a year stripping it back to its simplest components and reworking  it into the cataclysmic conglomeration of sound, visuals and light of data.anatomy [civic].

‘It was like being given a secret file from the FBI’, says Ikeda. ‘A Civic consists of thousands and thousands of tiny, tiny parts, but I saw a certain beauty in that.

‘It’s like a human – there are so many organs in it – and that inspired me. My installation will reveal the richness and beauty of the ephemeral concepts that are embodied physically in the car.’ 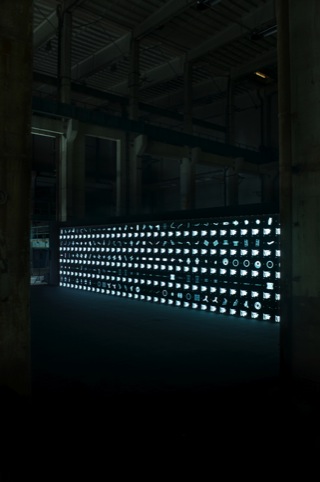 From this vast amount of intricate minutiae, data.anatomy [civic] is expansive, immersive and unrelenting  intense. Housed in MUM (Kraftwerk) gallery, a huge disused power station in Berlin’s Mitte, the piece takes the form of a three-screen triptych, ebbing between a holistic, immerse work and discrete three-dimensional works colliding into the space from different angles. Ideka says, ‘the precision of the work contrasts beautifully with the roughness of the concrete space.’

The 12-minute video veers from using throbbing grids of  tiny images moving in Tetris-like determination,  to a massive experiential assault.  The sounds are as imposing and mesmerising as the lights and visuals they help delineate – an eerie series of glitches, crackles and bleeps. At times, it’s clear what we’re seeing – a recognisable sketch of a specific car component, and at others, the CAD designs have been stripped right back and reconfigured into abstract arrangements of lines, dots and patters.

A huge departure from the mathematical precision of the parts that made it, data.anatomy [civic],  is an all-encompassing, experiential  phenomena –  as much akin to the techno club housed in the spaces basement as to the Honda civic car whose embryonic beginnings it manipulates.

data.anatomy [civic] will be on display at MUMA (Kraftwerk) Gallery,Rungestraße 20, 10179 Berlin until 1 May