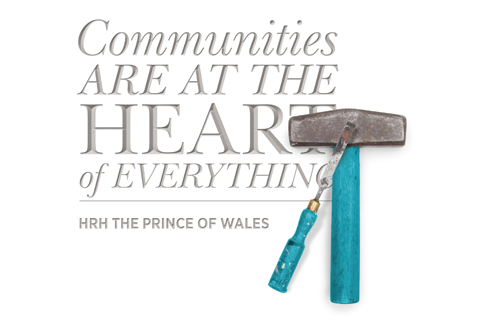 The consultancy was appointed to the project about eight months ago following parent group WPP’s work with the charity.

Sam Griffiths, senior designer at The Partners, says, ‘They needed a way of presenting themselves which gave them the ability to communicate in a more compelling way about what they do and their successes, and they needed a design framework that enabled them to do that. The previous identity was in danger of looking a bit recessive.’

The new logo uses blue instead of the former orange and grey colour palette, which aims to allow the Foundation to better pinpoint its successes and differentiate it from other Prince’s charities. A holding device was used to add emphasis around  the feathers emblem which was retained from the previous identity.

The rebrand is centred around the new tag-line ‘transforming lives through engaging, educating and empowering people’, which aims to appeal more to the wider public, as well as those in the industry in which it operates, such as planners, designers, builders, local authorities, communities groups and governments.

The identity will be shown across all materials including the website, which was designed by The Partners and built by the Foundation’s digital agency Home Made; pin-badges; fundraising collateral and stationery.

Griffiths says, ‘The new brand has a bit more visual presence and strengthens the way they talk about themselves. Formerly it was a bit long-winded, so we did a lot of work to help them edit down and focus what they’re saying.’

Nick Eagleton, creative director of The Partners, adds, ‘Refreshing the image of The Prince’s Foundation, we created a bold, blue identity which we were able to use in an innovative and striking way to communicate the charity’s ethos of engagement, education and empowerment.’

News analysis – The Portas Review of the High Street