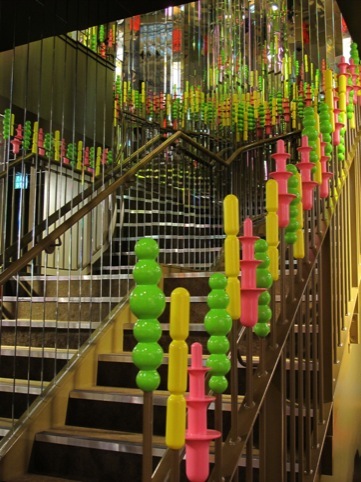 The store aims to become the Monkis’ home and playground – places of Disneyland-like fantasy aesthetics and playful Japanese-inspired kitsch. All interior design is carried out by the in-house team of just four people, led by Stockholm-based Catherina Frankander, the head of interior concepts, who talks to us about the Monki interiors.

Design Week: So how did you come to be working with Monki?

Catherina Frankander: I was working with Monki from day one with my consultancy Electricdream – there were two founders. The graphic [design consultancy] was Vär, which has the double meaning of ‘spring’ and ‘hours’ in Swedish, who spent some time in Japan. Then we were asked to only work on the Monki stores, and it was a great opportunity. It’s been such an amazing journey – from the first concept we now have 60 custom designed products. A lot of time and effort to ensure every detail is in place. There’s just four people who’ve worked across 55 stores – working on every construction detail. The first meeting started with very basic ideas of what the brand was about  – they came up with the Monkis and they needed a world to inhabit.

DW: How do the stores reflect the Monki brand?

CF: The store interiors are such an important part – the store design has been the cornerstone of the brand from the beginning. All the details right down to the labels are an extension of the immersive Monki world. The clothes labels, created by Vär, are in the shape of the dripping chemical that forced the Monki’s into being. It’s the idea of another realm – portals into an otherworldly place. Since the beginning the Monki world has expanded to comprise many other things. It’s not just a brand  – it allows the customer to co-create and be a part of that universe. Everything we do is to inspire and trigger the imagination.

DW: When looking at the store design, what’s the target audience you have in mind?

CF: It’s more about attitude to life rather than age group. It’s style and personality  – not age group and nationality. [The brand] has got a lot in common with creativity and the music scene – references like that  – but this concept has been designed more as a way to surprise and excite customers in the same manner as the clothes do. 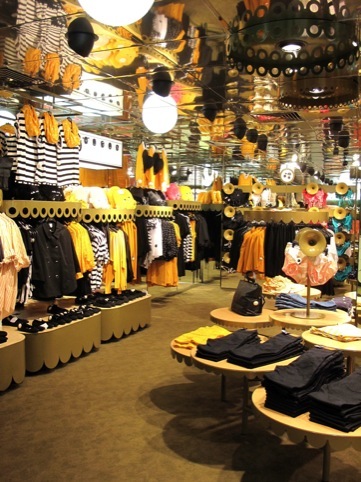 CF: the first store opened six years ago with the Forgotten Forest concept. There’s been a very obvious development and progression with the company. The first shop was very small and basic – at the time there was only a very small collection. Some of the stores then were only about 70 m2 big – now the average size is about 300 m2.

[The Carnaby Street store] is the Sea of Scallops concept – the same as in Stockholm, which opened in September 2011. The other concept is the City of Oil and Steel.

DW: So each concept is based around the Monki characters – how has that been reflected in the stores?

CF: We’re constantly making adjustments and improvements, but we’re also looking to develop new parts of the Monki World. There’s a common alphabet that unites the three concepts. The focus has always been on story-telling – every detail communicates something. We’re always trying to create a world of our own – everything is thought about in terms of landscapes. 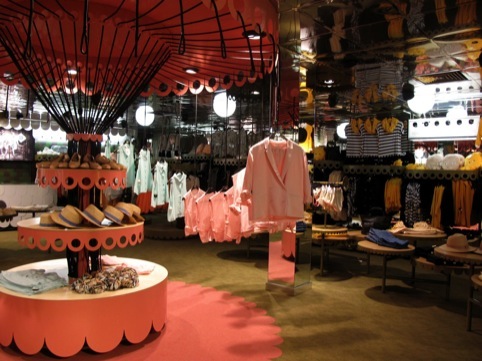 DW: So how do the in-store elements evoke the Sea of Scallops underwater feel?

CF: The lights are silvery streamers – they’re jellyfish – the display tables are water-lilies. The carousels are sunken carousels form an ancient civilisation – with the ropes from a long-gone schooner. The floor is moss-green like the sea bed and the mirrored ceilings are like the water.

DW: What’s next for Monki? Will there be more large-scale UK stores and would you use a fourth concept?

CF: We’re looking at UK-wide locations in as many cities as possible, but we have to find the right location. There’s a possibility of a fourth concept – we’ve been talking about it but we haven’t started sketching yet. Monki’s all about progress – we’re always wanting to top off the last thing we did. We’re highly critical of our own work – no matter how much people compliment it it’s dangerous to get complacent. When we started out,  the stores has to  be the word of mouth, so we wanted to launch as many concepts as possible, and it’s nice if not all the stores are the same. we don’t think multiplicity means sameness.