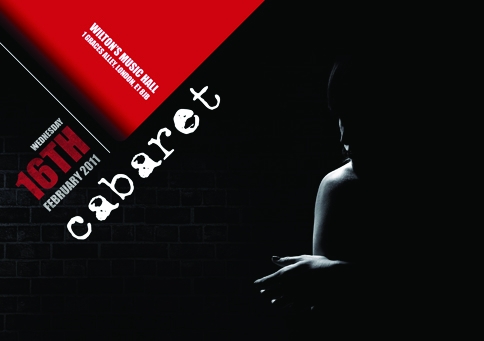 The consultancy was appointed to the project without a pitch in November 2010. Lamda had approached it following the work it had carried out for the Conservatoire for Dance and Drama, the umbrella organisation looking after the interests of drama, dance and performance colleges, such as the Royal Academy of Dramatic Art and Lamda.

The project involved creating the design to be used across the show’s programme, posters and invitations.

Gus Mark, director of Mark Design, says, ‘The idea was very much not to go down the fishnets and top hats route, and to take inspiration from that period of 1920s Germany, such as Otto Dix and Bauhaus.

‘Part of the brief was to incorporate keywords from the director, such as “dark”, “fear” and “sex”, and to represent the seamier side of Berlin.’

The design uses a red and black colour palette to reference the Bauhaus movement and 1920s style, and also ‘partly because of the onset of Nazism’, says Mark.

Cabaret will run at London’s Wilton’s Music Hall until 16 February.