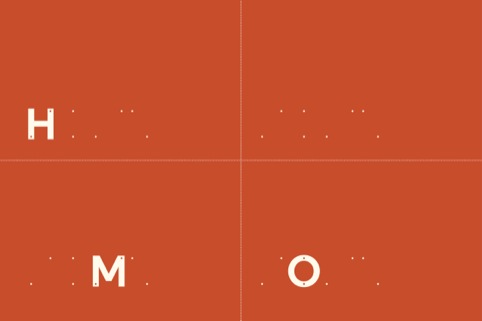 The new identity is based on screwed-in letters, which can be removed to create different iterations of the identity.

The consultancies worked together to devise the name and identity for the centre, formed from the merger of the Cornerhouse and the Library Theatre Company. The organisation will produce, host and support a multi-disciplinary arts programme, learning and participation, performance and digital innovation.

O Street and Creative Concern initially undertook research with audiences and stakeholders through workshops, and developed the ‘brand personality’ for Home around the concept  ‘The Play of Ideas’, according to O Street.

The name Home was chosen as the consultancy says it is ‘both challenging and welcoming’.

Ed Watt, O Street designer, says, ‘It’s been a very open process – one of the most open we’ve worked on. The audience has really shaped the process.’

The branding uses a typographic marque created with a bespoke typeface, developed alongside London-based designer Joel Baker, which will be applied to touchpoints including printed collateral, digital and internal and external signage.

Watt says, ‘We wanted something welcoming and that has a familiar feel, but also something slightly challenging – it needed it to be a brand that was not completely obvious.

‘The letterforms are based on something you might see everyday, the letter or number plates on doors, but with a twist in that the screws aren’t there. It had to be interesting and playful – that was the whole focus of the strategy.’

The branding uses a  predominantly red colour palette. ‘We felt red was very evocative of Manchester, as on a few trips there was this amazing glow in the morning’, says Watt. ‘There were other reasons, like the [centre’s] red curtains and seats, so it felt like it should be the key colour’.

The consultancies have also developed extensive brand guidelines and a toolkit on how to use the new identity.

The branding is currently shown on the Home website, and will now inform the wayfinding and elements of the interiors.

Home will be housed in a new £19 million building on Manchester’s First Street, which is being designed by Dutch architect Mecanoo and _space architecture, with interior design by Concrete Architectural Associates.