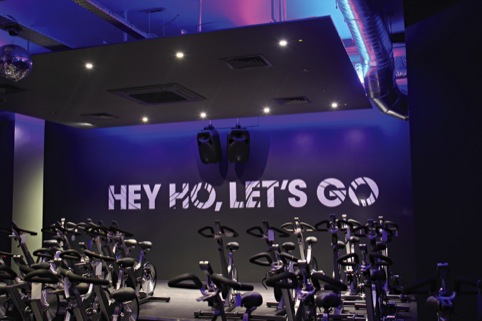 The Cyclebeat gym, in the City of London, is exclusively focused on indoor cycling and has been designed with dark interiors, stadium seating, a sound system, club lighting and a glitter ball.

‘Beatboard’ technology allows riders to track their progress in class and online, pitting themselves against other cyclists in the class.

Fivefootsix says it was asked to create an identity ‘that conveyed the studio’s premium service, while also capturing its independent music focused attitude.’

Taking cues from the aesthetics of music branding, Fivefootsix says it proposed an identity that uses ‘a dark base to set off strokes of colour, alongside a brand marque that captures the energy of indoor cycling.’

Song lyrics, which might also be interpreted as having a cycling connotation, are used as secondary branding on ads, and as supergraphics in the gym, ‘to emphasise the importance of music and inject a bit of humour into the Cyclebeat experience.’

Fivefootsix has also created a website for Cyclebeat where customers can view instructor’s playlists, access the Beatboard and book classes.