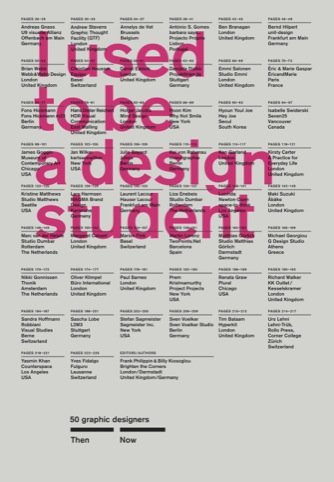 At the heart of new book I Used to be a Design Student, is quite a simple concept.

Authors Frank Philippin and Billy Kiosoglou have asked 50 of their design friends and heroes to present two pieces of work – one from their student portfolio and one from their professional practice – and talk about how they relate to each other.

It’s a cute idea and pretty insightful, particularly when you get someone like Brian Webb, who discusses a 1966 poster design that involved shooting a TV screen (more complicated than it sounds, as he only had a couple of sheets of film and didn’t own a TV) and compares it to a 2009 poster project for which he used letterpress.

The lesson he learned from both these projects? ‘An idea doesn’t have to be instant; it can sneak up and tap you on the shoulder.’

Interesting too to see Stefan Sagmeister comparing a 1984 student project in which he developed 20 different posters for a historic Viennese theatre, to his 2008 identity for Casa da Musica in Portugal. ‘Variations on a theme’, he says.

As well as showcasing these projects, Phillippin and Kiosoglou have also asked each contributor a series of questions about their lives as students and their lives now – ‘What time did you wake up?’ ‘How many hours a day do you spend designing?’ ‘What’s your favourite food?’.

Thus we learn that Ken Garland has graduated from tomato soup to ‘gambas al aquilo’, Liza Enebeis has an over-riding love of Marmite, and the designers have put on an average of 5kg since leaving college (apart from Daniel Eatock, who still tips the scales at a frankly minuscule 54kg).

There’s also, entertainingly, a spread contrasting portraits of the designers today, with more fresh-faced pics of them as students. In fairness, most of them looked fairly dapper (with the exception of Sagmeister, who’s sporting an outrageous New Romantic quiff – he’s on the left-hand page, second row, third from the left).

I Used to be a Design Student, by Frank Philippin and Billy Kiosoglou, is published by Laurence King priced at £17.95.

The Universal Addressability of Dumb Things