Virgin Atlantic needed a film that was in line with the current safety regulations from the Civil Aviation Authority but one that would also ‘be innovative, entertaining and align with the brand marketing and advertising,’ according to Art & Graft founder and creative director Mike Moloney.

The new video will be shown to thousands of passengers every week and replaces a current safety message video by Smith & Foulkes at Nexus, which has been running since 2001. 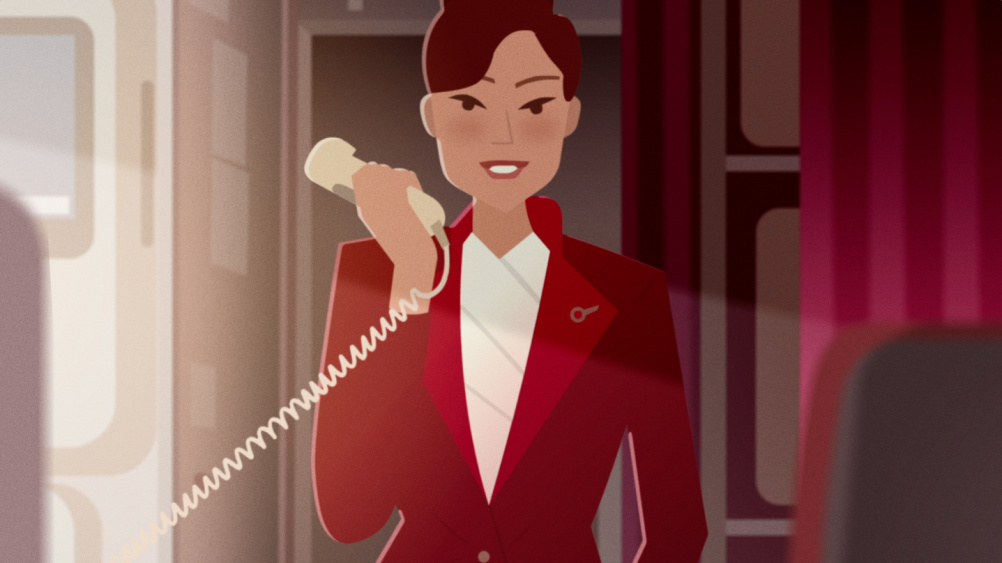 ‘Virgin Atlantic were keen to have a clean, fluid style and animation provided the perfect medium as it allows for longevity and versatility,’ says Moloney.

Art & Graft’s solution was to reference popular films in an animated sequence that is imagined by a day-dreaming passenger character, who falls asleep at the thought of watching a safety video.

The animated solution checks off all the necessary safety information as part of the sequence.

Moloney says the solution has a ‘cheeky Virgin Atlantic edge’ and also ‘seemed like a nice fit with their amazing onboard entertainment’.

A two- to three-month scripting stage was followed by the illustration stage, which saw Art & Graft combine 2D and 3D techniques.

‘Elements throughout the film were modeled in 3D; allowing us to “wrap” our illustrations around these models to keep the illustrative feel yet giving the scenes fantastic depth and space.

‘This allowed all the camera angles to be planned out and ensure the 2D characters could then be animated in each scene with the addition of further textures and casted shadows.’

One scene that ended up being cut was an animation of Richard Branson as a roaring lion, as a parody of the MGM opening credits. Branson agreed but MGM’s lawyers vetoed the idea.

‘If you look closely though, there’s a subtle representation of Richard Branson in the final psychedelic scene,’ says Moloney.