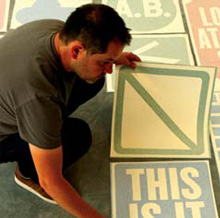 A prolific 2010 for graphic designer Anthony Burrill cements his place in this year’s Hot 50. It began with widespread applause for his recent exhibitions, including a collaboration with product designer Michael Marriott, The Right Kind Of Wrong, at London advertising agency Mother, and the Geometry in Nature and Colette shows in Paris. Another solo show, In a New Place, ran at Kemistry in London’s Shoreditch last summer and a group exhibition, I Love Graphic Design, as part of the Triennale di Milano, completed an eventful year.

The Hot 50 panel cited Burrill as a graphic designer who challenges authority and perceptions, recently demonstrated in his searing poster stating ’Oil and Water, Do Not Mix’, following last April’s BP oil spill in the Gulf of Mexico. He was commissioned by communication agency Happiness Brussels to produce the limited-edition poster, which raised funds for the clean-up operation.

Burrill’s work is distinctive, using an interesting mix of materials and processes, showcased in his collaboration with Marriott on the trophies for the 2009 Brit Insurance Design Awards at the Design Museum. Looking forward to this March, we see Burrill take the lead role at Pick Me Up, which returns to London’s Somerset House for a second year. He will set up residency at the graphic design exhibition where he intends to invite special guests to create new work.

Burrill has an ability to keep things simple while retaining humour and personality in his work. Combining this with his openness to new
opportunities could lead this conceptual designer anywhere.