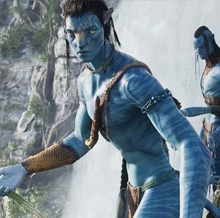 In the future greedy humans colonise the planet Pandora to harvest its rich minerals with complete disregard for the planet’s eco-system or the 3m-tall, blue-skinned indigenous people, the Na’vi tribe, who live there. Hero of the day and paraplegic human Jake Scully, played by actor Sam Worthington, is transformed into a Na’vi avatar to gain an understanding of their way of life. Battle commences, relationships and love occur and good conquers evil (evil being the humans here).

While the storyline is nothing new, with the plot being told countless times before (think Dances with Wolves in the rainforest of Fern Gully), Avatar has revolutionised the way we watch film, as the cinematic experience becomes more of a visual journey.

Avatar is the brainchild of director James Cameron, who for years has been pumping millions into the evolution of 3D cinematography.

The Hot 50 selectors all agreed that 3D is a complete game-changer and the biggest step since black-and-white films changed to colour. Avatar has become a blueprint for Hollywood blockbusters – from now on, films may well be classified as ’pre-Avatar’ and ’post-Avatar’.

Private investment in culture drops by 3 per cent, research shows