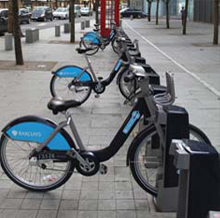 A familiar scene playing out across the streets of London is one of people cycling to work, back home or just for pleasure on the blue Barclays-backed bicycles which, incredibly, already have been used for more than 1.5 million journeys.

London Mayor Boris Johnson introduced the scheme in July 2010, and it has seen more than 100 000 Londoners and visitors to the capital enthusiastically take to two wheels as an alternative mode of transport around the city.

While the two-wheeled chariots are affectionately known as ’Boris bikes’, in honour of the mayor, who gave the go-ahead to the project when he came into office, we must not forget that the initiative was actually the brainchild of his predecessor, Ken Livingstone.

The Barclays-sponsored cycles are sturdy, but nonetheless welldesigned to cater for the broad spectrum of potential riders.

The branding has provoked much debate in the design world, with the likes of Identica chief executive Franco Bonadio protesting that a bit of corporate discretion would have gone a long way when promoting Barclays’ sponsorship.

A backlash against the ’invasive’ corporate branding saw ’F*** Barclays’ stickers adorning the bikes. This, on a more positive note, has
led to the first customisation projects (see DW Blog, 25 September 2010).

Looking forward, there are plans to expand the scheme, with a further 2000 bikes and 4200 docking points confirmed, along with plans to roll it out across London’s East End.

Love them or loathe the Boris bikes, there is no denying that the scheme is a successful community engagement project and a valuable addition to London’s public transport system.