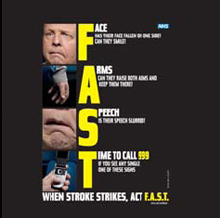 It’s hard to ignore the statistics. People suffer approximately 110 000 strokes each year in England alone. But most of us don’t know how to spot the early symptoms of a stroke and how to act on that knowledge.

Last year saw the launch of a multi-platform campaign, targeting a core elderly audience, to identify when a stroke happens and the signs to look out for. A memorable acronym, Fast ( signifying face, arms, speech, time to call 999), was developed for the new venture.

Advertising agency DLKW Lowe developed an advertisement as part of the Department of Health’s stroke awareness campaign. Results show that within a year the initiative changed the behaviour of the British public, as an estimated 9864 stroke victims got to hospital faster and 642 were saved from death or serious disability.

This goes to show the power of good advertising and DLKW Lowe deservedly picked up a gold and silver award for its work at the 2010 Institute of Practitioners in Advertising Effectiveness Awards.

As a public-sector campaign, the Hot 50 selectors felt that Fast signifies the importance of awareness-raising exercises by Government departments such as the DoH and the beleaguered Central Office of Information. They said it reinforces the need for continuing public-sector investment. It is great that it has also been acknowledged by the ad community as a creative success.