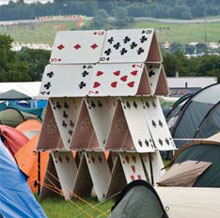 A winning hand for homelessness charity Shelter’s House of Cards campaign last year has brought it to the attention of the Hot 50 selectors. After reaping several awards, including golds at the New York Festivals and the 2010 Cannes Lions and a win in the not-forprofit category at last year’s Design Week Benchmarks, it has also been shortlisted for this year’s Design Week Awards.

The House of Cards campaign, devised by Leo Burnett London, aimed to raise awareness of and funding for the housing crisis facing the UK. The advertisement, which showcased a city of falling cads, was picked up by various blogs and websites and soon became an online hit generating more than £1m worth of free media coverage. A key component of the campaign was the House of Cards exhibition, consisting of the ultimate deck of cards designed by 52 leading artists including Damien Hirst, Marc Quinn and Vivienne Westwood, which also raised money in the form of an auction. The sale of the cards and the auction together raised more than £150 000 for the charity.

Pentagram’s Domenic Lippa should also be honoured here as he was approached by Leo Burnett to create the identity for the campaign and auction event in September 2009, as well as an exhibition catalogue and limited-edition box of A5-sized playing cards.