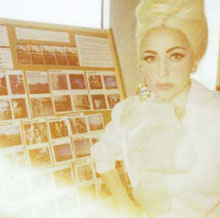 Ever heard of Stefani Joanne Angelina Germanotta? No. How about if we told you she likes to wear plastic bubble dresses, accessories with teacups and has a penchant for clothing made out of meat? It could only be the queen of playful style, Lady Gaga.

The fashion icon, pop star and inspiration to many is well recognised for her outré sense of style which clashes with her mainstream pop sensibility. Her hits that include Poker Face, Paparazzi and Just Dance feature videos with a much more dangerous aesthetic than her music. The pop princess’ ability to create herself as a brand and even cause influential movements in fashion gives this year’s selectors a number of reasons to acknowledge her in the Hot 50.

Both fashion and music industry experts have cited Lady Gaga as the new Madonna, following successes that include two 2010 Grammy award wins. Last year also saw her included in Time magazine’s annual 100 list of the most influential people in the world.

Her world domination doesn’t end there. The star was appointed as creative director of Polaroid in 2010, which saw the ’Haus of Gaga’ develop prototypes to blend the history of Polaroid with fashion innovation, and instant film with the digital era. It is not clear what role the 24-year-old singer will play as yet, but Gaga-inspired Polaroid products will soon hit the shelves. Watch this space.