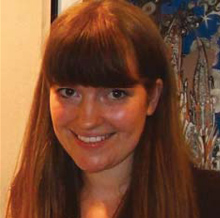 It is rare for an illustrator to make a big impact on design, but Lizzie Mary Cullen is doing just that. She makes it into the Hot 50 because of the way she has developed her own work and used it to promote design in new and interesting ways.

Since she won top prize at One Year On – the off-shoot of London’s New Designers annual graduate show – in 2009, Cullen has managed to get herself out there through her amazing psychogeometric drawings and fantasy illustrations for the likes of Italian restaurant chain Zizzi,
which commissioned her work to give each outlet its own identity.

Last year she held her first solo show at London’s Framers Gallery, donating the proceeds to the Big Issue and attracting Harry Potter star Daniel Radcliffe to the opening. But she was also happy to return to New Designers, creating huge wall graphics on site during the event.

Cullen’s eccentric style and ability to do large-scale work under the public gaze may set her apart, but her energy and drive provide an inspiration for other emerging designers. You can achieve great things if you push for them – particularly if you do it with the modesty and charm that she exudes.