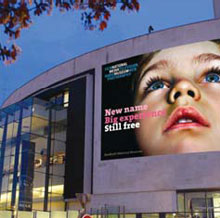 This city in the North of England is an epicentre of activity. It is a creative hotspot for music, art and design, with consultancies such as Love, True North and Mark Studio and designers like Mark Denton and London-based Peter Saville thriving in the area and continually creating award-winning work.

In addition, Manchester design consultancy NRN Design has been appointed to create new Internet galleries at the National Media Museum in Bradford. The consultancy has been contacted to provide design services for the £2m project, which is due to launch in 2012.

Meanwhile, Manchester City Council’s in-house design group is also upping the ante with creativity being pushed in the public sector. A new arts and cultural centre is planned for central Manchester to house the Library Theatre and Cornerhouse, the international centre for contemporary visual arts and film. Manchester City Council will launch an architectural competition to design the £19m building this year. Funding is in place and it is hoped that the new facility will open in spring 2014. Regeneration projects are also evident, which will be helped by the BBC moving up North later this year to make its new home there. This surely will have a knock-on effect for the city and the local creative community, creating new jobs and services in the area.