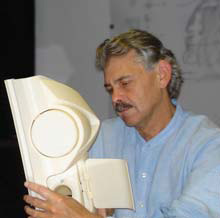 Professor Gordon Murray is long-hailed by speed-loving petrol heads as an automotive hero. He started his career as a Formula One racing car designer, developing several cars that that won a string of Grand Prix races and World Championships for Bernie Ecclestone’s Brabham. He then joined McLaren where he repeated the exercise, producing the F1 car that earned Ayrton Senna his first championship.

His love affair with automobiles soon drifted from F1 to road cars, and he left McLaren behind to set up his own company, Gordon Murray Design. The new company aims to be the world leader in automotive design and reverses the current industry trend for sub-contracting by having an in-house capability for design, prototyping and development.

Murray has often voiced his opinion on the urban transport crisis, stating there are far too many large cars being driven by one person. His solution was launched in the form of two urban city cars – the tiny T25 and the electric version T27.

Four prototypes of the T27 vehicle are set to be developed by 2011 in a £9m project. The threeseater cars, which are designed to be slightly smaller than Smart cars, will be produced using a low-energy manufacturing process developed by Murray, called iStream. This won the Society of Motor Manufacturers and Traders 2010 Automotive Innovation Award. The process has already been used to develop the petrol-fuelled T25 prototype.