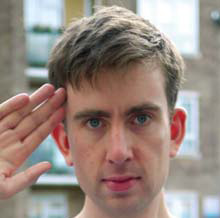 Stars emerge quickly in the interaction world, given the ever-changing nature of the technologies underpinning the design. But when they have been identified, they really make an impact.

One such is Ross Phillips, nominated by digital exponent Malcolm Garrett of Applied Information Group for Design Week’s 2008 Rising Stars supplement and now already an established player in the field. He has reportedly never had to apply for a job since leaving college and enjoys the support of luminaries such as Andy Cameron, now at Wieden & Kennedy, and fashion photographer Nick Knight.

Until recently, Phillips was head of interactive at Knight’s group Showstudio, subject of a great exhibition at London’s Somerset House, which included a host of interactive displays, both digital and actual (Knight set up live photoshoots for the likes of Vogue magazine there). Now he has decided to go solo, though given the collaborative nature of the interaction world he will no doubt find work with his former patrons.

Phillips will also be working on projects with fashion accessories brand Mulberry, of which Construct founder Georgia Fendley is creative director, so watch this space. Maybe that kind of development will put the luxury brand into the Hot 50 listing next year.